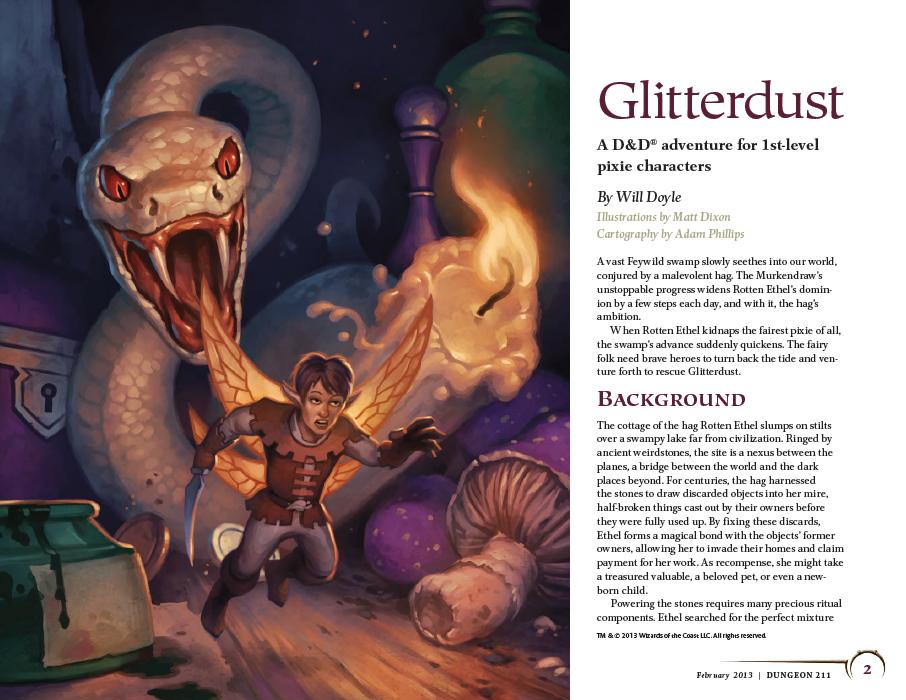 King Elidyr has played this adventure and would recommend it.

Glitterdust is one of many excellent adventures published late in 4e's lifespan. Sadly, because these modules came out during the D&D Next playtest, and because they were published in Dungeon Magazine, they went largely unnoticed at the time and are even more obscure today. Glitterdust is one such hidden gem, which is a shame, because it's an adventure that deserves more love. I've run it twice as a one-shot, both times with an all-pixie party. While it can accommodate an ordinary party, I really wouldn't run it any other way. The module was designed for 4e pixies, who could speak to animals, shrink objects, and fly. All these abilities are given time to shine in the adventure. My players had a blast talking to roosters, shrinking potions, and hiding in the crevices of a hag's cottage (Rotten Ethel really is a great name for a hag).

The module has the vibe of a Grimm's fairytale, full of dark whimsy. This perfectly suits the flavor of hags and is generally the tone I aim for with the fey. It also resembles a Disney film, with talking animals, a bumbling human adventurer, and animated objects à la Fantasia. Except, some of those animals will happily devour pixies, and animated frying pans, nutcrackers, and nesting dolls will murder your party with horrifying efficiency. That's the other thing about this module. It is DANGEROUS. If your players aren't careful (or exceptionally good at combat), they'll be cycling through pixies like a shark cycles through teeth. My players now affectionately refer to this adventure as "the pixie meatgrinder." Although I can see that being a turn-off for some folks, if you embrace the idea, it can be a ton of fun. There's just something hilarious about a pixie party being put through the equivalent of Mad Max: Fury Road. In my last run, pixies were devoured by frogs, skewered by bullywugs, and pulverized by cookbooks. Poor Buttercup the pixie bard was blown into the oven by the hag's enchanted bellows and promptly fried to a crisp. Thankfully, my players found this just as funny as I did. You might say we have a hag's sense of humor.

The adventure fortunately comes with a ready-made excuse to introduce new pixie PCs. The premise of the module is that Sunfire, the pixie king, has been sending leagues of pixies to go deal with the hag (none of which have thus far returned), so every nook and cranny of the hag's cottage might hide a captured pixie. If you need to speedily replace a dead PC, you can always find one stuffed in a bottle, locked in a cage, or trapped in a magic mirror. Before he sends them off, the king allows each player to select a magic item from his treasury. These can make for some wonderfully creative moments. Your players might attempt to feed the hag a love potion or trip her with a spool of invisible thread. Sunfire also warns the party to "remember your pixie ways," which is great advice for this adventure. Players that approach the module cleverly, with an eye towards making friends, will have a much easier time than those who barrel headlong into combat. The king also explicitly advises the party to weaken the hag before trying to face her (a level 8 solo for a 1st level party, yikes!). The module provides a number of ways to do this, from stealing her cane and medicine to poisoning her and killing her familiar (that last one is especially crippling). Of course, since the primary goal of the adventure is to rescue Glitterdust, the fairest of pixie of them all, the players don't actually need to fight the hag. Their strategy is up to them. The way the module rewards creative thinking it probably its greatest strength.

As good as this module is, there's still room for improvement. The skill challenges as written are somewhat lackluster, and one encounter in particular could be made more consistent. A river crossing is supposed to be haunted by three spirits who force the PCs to relive their final moments, yet the encounter features 1 wraith and 8 wraith wisps. I changed this to 3 grasping zombies (corpses of the three people who murdered each other) who lurk under the water, grabbing PCs and trying to drown them. I think the animated objects could be made more evocative. Instead of boathooks, have the party battle bread rollers. Instead of a suit of armor, have it be a rocking horse. No need to change the stats, just give them better flavor. I also added a nighttime encounter where the party was attacked by a fey crocodile. That taught them to be more careful where they chose to sleep.

A recurring theme in Glitterdust is that the hag treats everyone terribly. Her servants and allies resent her and are willing to side with the party at a price. I took this theme and ran with it, adding lots of NPCs who are potential allies. Here are some additions I made that my players especially enjoyed: (1) A friendly owl in the swamp willing to let the party rest for the night in his home. (2) A gargoyle-faced kocker on the hag's front door willing to let them in if the party answers riddles (he loves riddles and rarely gets a chance to tell them). (3) A goblin runt named Hedgewart who squirms in a sack hanging in the hag's kitchen. He swears to do the pixies a favor if they free him. He is an excellent thief and will open any lock if asked, but his greed might get the better of him. (4) A number of potions and ointments in the hag's cabinets, both good and bad. Labeled "midnight oil," "mother's milk," "toad extract," "felicity," etc. (5) A will-o'-the-wisp trapped in an iron lantern. If freed, the wisp will lead the party anywhere they like, wreathing them a blue light that makes them invisible, before wandering back into the swamp. (6) A magic broom locked in the old sea chest. As soon as the chest is opened, the broom bursts out of it, crashing through the cottage as it searches for an exit. The party must frantically attempt to get a hold of it; if it escapes, it flies straight to the hag. (7) A talking skull on the hag's desk. The skull wants nothing more than to watch the sunrise. It will reveal the hags' secrets if the party promises to take it from the (perpetually overcast) swamp. (8) Nyla the nixie, a water faerie who lives in a sandcastle in the lake collecting precious things that wind up on the sandy floor. She cares deeply for the otters and will offer the party sanctuary in her underwater home if they agree to help them get their voices back. She has a magic conch that can blow bubbles big enough to engulf a pixie and provide them air.

Overall, I highly recommend this module! My first run ended in a TPK, but in the second one, the party was (eventually) victorious. They killed the hag (who melted down into a pile of black sludge), restored the otters' voices, rescued Glitterdust, and brought the skull back with them to the court of King Sunfire. They were especially attached to Hedgewart the goblin, allowing him to take all the gold they had earned. In the epilogue, he became the king of Goblin Town, and the party received a royal invitation to his court.