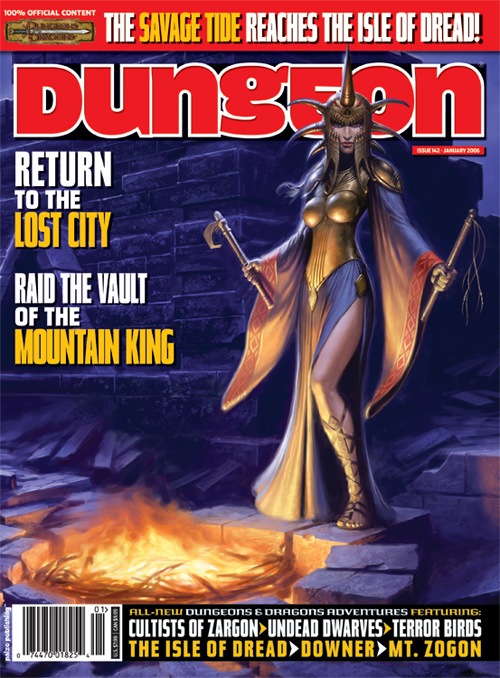 Here There Be Monsters

A long, perilous ocean journey behind them, the crew of the Sea Wyvern finds itself shipwrecked on the Isle of Dread. Their destination lies well over 150 miles to the south, miles heavy with the threat of the island's terrible inhabitants. Yet the unknown enemies are far more sinister, for more than just dinosaurs hunt the vast jungles. Before long, a cunning fiend picks up their trail, and its duplicitous master demands their sacrifice.

"Here There Be Monsters" is the fourth chapter of the Savage Tide Adventure Path, a complete campaign consisting of 12 adventures appearing in Dungeon. For additional aid in running this campaign, check out Dragon's monthly "Savage Tidings" articles, a series that helps players and DMs prepare for and expand upon the campaign. Issue #352 of Dragon explores the Isle of Dread in detail, providing a complete ecology of the island and the writing of Larissa Vanderboren. This article can be used as a player handout to represent the journals the group recovered from the Vanderboren family vault in the first adventure in the Campaign.

Shipwrecked on the Isle of Dread! Faced with a dangerous journey, the PCs must escort a ragged band of castaways through monster-infested wildlands in order to reach the safety promised by the colony of Farshore on the isle’s southern tip.

Written By
Jason Bulmahn
Published By
Wizards of the Coast
Publication Year
2007
Setting
Greyhawk
Environments
Dungeon , Wilderness , Jungle , Island , Ruins/Tomb/Cemetary
Link
http://paizo.com/products/btpy7slj?Dungeon-Issue-142
Handouts?
Yes
Battle Mats?
No
Includes Characters?
No
Level
Levels 7–9
Soloable?
No
Found In
Dungeon Magazine #142
Part Of
Savage Tide Adventure Path
Boss Monsters and Villains
Common Monsters
Notable Items
Disclaimer: All information listed on this website comes with absolutely no warranty and may be incomplete or outright wrong. We rely on contributors from the community to add and curate adventure data. The publisher and original adventure authors are not usually involved in the process. In many cases, we have no way to verify that the data we show for an adventure accurately represents the adventure's content. If you find incomplete or wrong data, please login and create a change request on the adventure details page.
Bookmark

DGoldDragon28 has played this adventure and would not recommend it.

Like my previous reviews of Savage Tide instalments, this review will focus on this specific adventure, not the Savage Tide AP as a whole, but I will say the later adventures of the AP look promising, unlike this one. I did not enjoy this adventure much, and I doubt my players did much either. The idea of "shipwrecked and need to get to civilisation" isn't bad, but the implementation was.

The adventure starts with a discussion of how much food the party will need to collect from the wreck and carry with them. This is pointless. By seventh level, most parties (certainly mine) have access to ways to get food, from the druid or ranger with full ranks in Survival to the cleric with create food and water. Survival checks to forage just aren't that hard anyway, even with the penalties that the adventure imposes for the isle.

The journey breaks down into jungle, dungeon, gargoyles, dungeon. The first jungle bit isn't terrible -- it showcases a bit of the Isles famous threats, dinosaurs and thunder birds. The aranea bit is a bit odd, but a social encounter of some kind to break up the trek is nice.

Both dungeons are fairly linear, and employ the same trick of false choice -- before you can open the doors to progress, you need two keys, requiring you to go down what would otherwise be an "optional" path. To repeat, he authors pull this same trick twice in the SAME ADVENTURE. The first dungeon is just ruins you need to pass through. It isn't terrible apart from its lack of options, but some more plot relevance would help. The gargoyles are pathetic, honestly. One PC might go off the cliff if they're being reckless but it's easy to avoid and otherwise these creatures pose little threat. The creepy "hauntings" from Olangru are a nice touch, but it would be nicer if it felt like they led somewhere.

The Fogmire dungeon is where we finally get a glimpse of this AP's real threat, but the actual dungeon itself is underwhelming. The mirror portal room had the potential to be awesome, but with no real clues and most errors (apart from the candles) having no penalty for "wrong" guesses, it was just tedious trial and error.