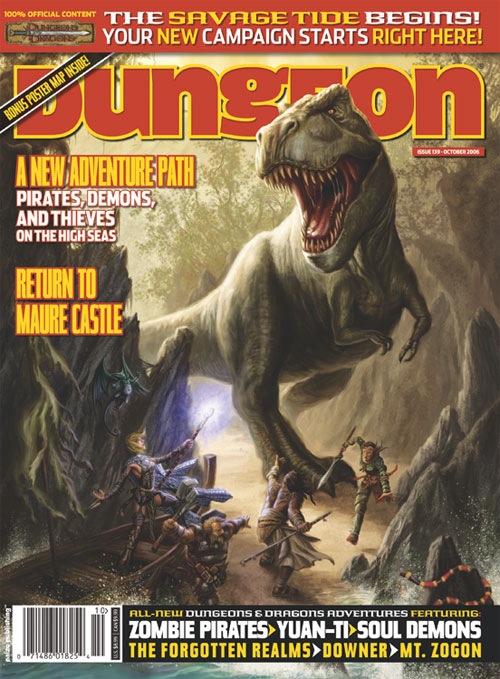 There Is No Honor

The first savage tide has already touched the mortal world, yet none who live today recall this time of red ruin. Unleashed from the cruel heart of a fell seed known as a shadow pearl, this savage tide swept over an ancient city perched atop the crown of a remote island. The tide transformed beggar and noble, merchant and thief, resident and visitor into feral, ravenous fiends. The fruits of centuries of labor came crumbling down in a matter of days, and when the survivors tried to stem the tide by destroying the pearl, the resulting blast of power sunk their city into the boiling lake of death. Through it all, the Abyssal architect of the savage tide watched, taking pride in the ruin. When the tide's final ripples had faded, what was left became known as the Isle of Dread.

Now, after a thousand years, the true masters of the Isle of Dread look upon new targets, new cities beyond the horizon, compelled by the hateful will of their demonic lord Demogorgon to prepare for the coming glory. This time, the doom will not be limited to one hapless city. This time, all of civilization waits unknowing on the shore, blissfully ignorant of what the incoming tide brings in.

"There Is No Honor" is the first chapter of the Savage Tide Adventure Path, a complete campaign consisting of 12 adventures that will appear in the next twelve issues of Dungeon. For additional aid in running this campaign, check out Dragon's monthly "Savage Tidings" articles, a series that helps players and DMs prepare for and expand upon the campaign. Issue #348 of Dragon kicks off this series with details on six affiliations based in Sasserine that your players may wish to join. And if you're running Savage Tides in the Forgotten Realms or Eberron, make sure to check paizo.com for the latest conversion notes for each adventure.

The Savage Tide Adventure Path debuts as a new band of heroes confronts exotic monsters, undead pirates, and a sinister guild of thieves on the cusp of unleashing a murderous coup.

Written By
James Jacobs
Published By
Wizards of the Coast
Publication Year
2006
Setting
Greyhawk
Environments
Dungeon , Ship , Cave , Island , Ruins/Tomb/Cemetary , Town/Village , City/Urban , House/Mansion
Link
http://paizo.com/products/btpy7zv0?Dungeon-Issue-139
Handouts?
Yes
Battle Mats?
No
Includes Characters?
No
Level
Levels 1–3
Soloable?
No
Found In
Dungeon Magazine #139
Part Of
Savage Tide Adventure Path
Boss Monsters and Villains
Common Monsters
Notable Items
Disclaimer: All information listed on this website comes with absolutely no warranty and may be incomplete or outright wrong. We rely on contributors from the community to add and curate adventure data. The publisher and original adventure authors are not usually involved in the process. In many cases, we have no way to verify that the data we show for an adventure accurately represents the adventure's content. If you find incomplete or wrong data, please login and create a change request on the adventure details page.
Bookmark

2 0
Please sign in to rate or leave a review.

cr4nk13 has played this adventure and would recommend it.

I'm in the middle of running Savage Tide AP for the second time; I'll review the chapters we've passed so far. The first party I played with got to chapter 4 when we quit due to life happening, the current run is in that exact chapter. Let me just start off by saying that this adventure path is great on the whole, if you read it all the way through as a DM you get so inspired because you can see all the connecting dots from the beginning and it offers a lot of space to expand on what's going on along the way. That being said; the entire adventure can get a little "railroad-y", not in the sense that there's not a lot of different ways to approach the problem (there are various ways even addressed in the AP itself), but rather that the story kind of forces the party to "keep moving".

There are a few down-time moments; but from the instant the big bad-guy plot Demogorgon has for the world with the black pearls; I felt my players were constantly being forced to follow the clues very quickly because it's kind of a "end of the world" kind of scenario we're dealing with. That being said; Both times I ran this AP it was for the large part for first-time and inexperienced players and they never had a problem with being pulled along with the story as written.

As for this chapter specifically; this is a great great start to the AP. You get: 0. A gigantic setting explained in the city of sasserine including a players handout of the city for them to get inspired with (this is not part of the AP itself just the setting which is great)

Complaints and tips to fix:

9/10 if you ask me, so much going on and so many different ways to approach the given problems/challenges, it's a great adventure

Looking ahead, the Savage Tide adventure path as a whole looks quite good, although so far my group has only finished "There Is No Honour", and this introductory module leaves much to be desired.

The puzzle in the Vanderboren Vault is terrible as written. Leave it out or replace it with a better puzzle. In fact, why have the characters accompany Lady Vanderboren into the vault at all? I guess the idea is to give the players the idea that the late Lord and Lady Vanderboren were eccentric types (read: adventurers), but there's probably a better way of doing that. And it depends on your party a bit, but it's a bit of a stretch for the Lady to trust the players that much this early on.

My players pieced together the clues pointing to Parrot Island before the informant showed up. This was good -- it made the investigation actually feel meaningful (I didn't change anything here: they deduced Parrot Island from the city map and the fact that the boat had headed west from the shop). The encounters in the tunnels were decent, but a bit repetitive.

My players skipped much of the Lotus Dragon base, happening to take the turns that lead them to Rowyn. She died to a lucky crit on AoO when she was trying to chug her potion.

The adventure has some potential but it really needs retooling -- something I would have done if I had had the time.