"The Alchemists' Guildhall" is a rusalka lair suitable for four or five 6th-level characters. This adventure can be completed in one session.

The outpost of Fort Dolor has experienced an unprecedented stretch of peace in recent times. Then nearly the entire garrison disappears on a supposed routine patrol, and the town— still on the frontier— is left nearly defenseless. Can the adventurers dig to the bottom of the mystery at Fort Dolor before they, too, disappear?

A kobold king lair suitable for four or five 8th-level characters. King Qalqat is gathering followers in a bid to establish his own realm. A wanted dragonborn fugitive, Brustival recently joined his ranks and his power. However, Brustival is now a wanted man and there's a bounty on bringing back his head to the local magistrate. Kavalar Coppernight, a dwarf prospector, led a couple of dozen volunteers in a quest for rich veins of ore. Several months ago, they began underground mining operations, as well as a surface excavation for a small keep. Hearing of this development, the mayor of the nearest town sent two veteran militia members to investigate. They should have returned two days ago, and the mayor is growing anxious. The PCs are asked by the mayor to find out what happened to the two militia members. Pgs. 12-17 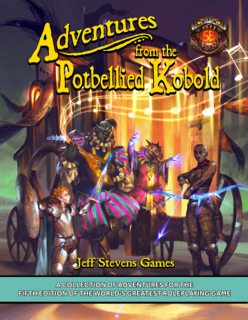 Adventures from the Potbellied Kobold provides you with fifteen unique adventures to use as one-shots, additions to your current campaign, or inspiration for a new campaign. We've even included a way to link several of the adventures, allowing you to run a short and quick campaign. The adventures use basic 5E creatures, custom creatures, and several Kobold Press creatures. Each adventure is written for a specific party level, but we've also included suggestions on how to adjust each adventure for a weaker or stronger adventuring party. In addition to fun adventures, you'll also find a few new magic items and NPCs to add to your game.