Cruel Summer expands on the summer arc of Waterdeep: Dragon Heist, adding two new factions, several colorful new NPCs and four new mapped locations. After the Cassalanter's Founders' Day celebration ends in death and destruction, their twin children are found to be missing. Waterdeep is in an uproar, the Cassalanters aren't talking and it falls to the party to solve the mystery of the childrens disappearance. Could it be connected to the sinister new faction taking root in the city? Who is the stranger whose corpse was left behind in the twins' bedroom? Is there a link to the surprisingly vicious Noble Council of Soapmakers? With this supplement, the PCs will have a chance to save the Cassalanter children from the terrible fate outlined in Dragon Heist, avoiding the "Trolley Dilemma" situation some players might not enjoy. It also incorporates elements of the Spring, Fall and Winter arcs, allowing the players to rub shoulders with Jarlaxle, Manshoon and the Xanathar. 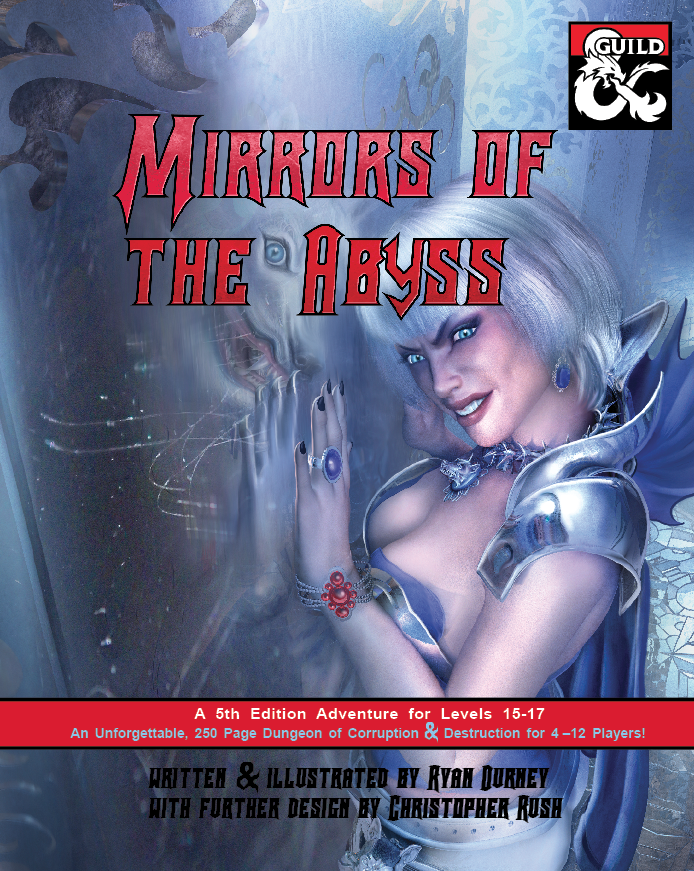 "For untold eons, Eshebala ruled over Vulgarea, the 193rd Layer of the Abyss...content to revel in hedonism, corrupt the hearts of her dwindling followers and inflict petty cruelty. Yet, if there are days in the Abyss, there came one when she realized she despised her own province. She hated demonkind. She hated the Abyss. It had become unbearably tedious, spent...done. The burgeoning goddess decided she would dip her toe back into the lives of mortals, and quest to remember...to understand her own existence...But that was a lofty goal for a mind that had long ago begun to unravel. Instead...She is learning that all she has left is cruelty...and it was always cruelty that gave her power, so she now believes, to the woe of any who cross her path." Partly inspired by a scant notation by Carl Sargeant in 1992's TSR book Monster Mythology: "Eshebala is the foxwoman deity of vanity, charm, greed, and cunning. Her symbol is a female fox. Eshebala appears as a foxwoman, a shapely fur-covered female with a fox’s head, or as a beautiful young elf maiden. She is bedecked in rich clothing and jewels, and carries a silver mirror. Eshebala’s realm of Vulgarea can be found on the 193rd layer of the Abyss. She is wily and vain. She favors beautiful things and collects jewelry and art, the tackier and flashier the better. She prefers to overcome her opponents using subtlety rather than force, seducing and devouring out of boredom. She loves gossip, and always insists on being the center of attention. Eshebala is a patron of evil shapeshifters who use their wits and wiles before resorting to violence." Eshebala is a true chaotic evil demon goddess, behaving 100% true to form, and an extremely challenging opponent to take down for your players. An unforgettable 262 page jaunt for Levels: 15-17, with multiple possible modes of play, including Party Mode for up to 12 players. Profusely and paintstakingly illustrated over the course of several years by an award-winning professional illustrator. No stock illustration in this beast! A loving, dark & insanely detailed exploration of the 193rd Abyssal Plane An exuberant nod to the most grueling, deadly dungeons ever created Rich encounters that play out in a unique way each time 100 + NEW CREATURES 200 + NEW TREASURES (& possibly the most illustrated treasury ever provided) 82 BOOKS for PCs to discover 70 + NEW SPELLS & RITUALS, INCLUDING DETAILED OPTIONS FOR DEMON SUMMONING 50 + NEW TRAPS, HAZARDS & EFFECTS (guaranteed to run amuck) 4 RANDOM TREASURE TABLES, including a TABLE OF GEMSTONES that would be useful in any campaign 2 NEW CLASS SHIFTS: the Demonologist & the Exorcist! The Forge of Fangs has been located in Vanrakdoom. While many innocents have been saved from an undying fate, the forge remains. Artor Morlin would like to see it torn to the ground and the threat ended forever. Part Three of the Undying Threat trilogy. A 4-6 Hour Adventure for Tier 3 Characters. Optimized For: APL 13