The seaside town of Ashenport has a troubled past and a dark secret. If you spend a night in Ashenport, you just might not wake up the next morning. "The Last Breaths of Ashenport" is an adventure of survival and alien horrors. The adventure is self-contained and can be placed in any setting. Pgs. 70-105 "Sometimes bugs are just bugs, and sometimes they are organized into a hive mind that is just as smart as humans. Ants are just that. In battle, the ants become a horde of raging combatants that form a blur on all sides. While ants are typically peaceful, they respond to a threat against the hive with a scale of violence that’s almost impossible to imagine. Utterly devoted to duty, ants never retreat from a confrontation—even in the face of certain death. Their engagements are brief and brutal. Working in teams, ants grab enemies, holding them in place until one of the warriors rips into the captive’s body, leaving it smashed and oozing." "Of Ants and Men begins as a quest to recover (e.g., steal) eggs from a giant anthill near the town of Endhome." "This adventure is designed for characters of levels 4 to 8." "The adventure can also be played (perhaps more effectively) by smaller groups. In response to many requests from our fans, the main encounters are designed to work well with groups of two to three characters of levels 6 to 8. Even a solo adventurer could do reasonably well, if the individual character had very good climbing, trap finding, and stealth skills. Druids, barbarians, and rogues will fare best in cases where the groups are limited in size." "While there’s plenty of opportunity for combat here, characters who think through a situation before drawing their swords are likely to do best. Hacking one’s way through is likely to result in character deaths." 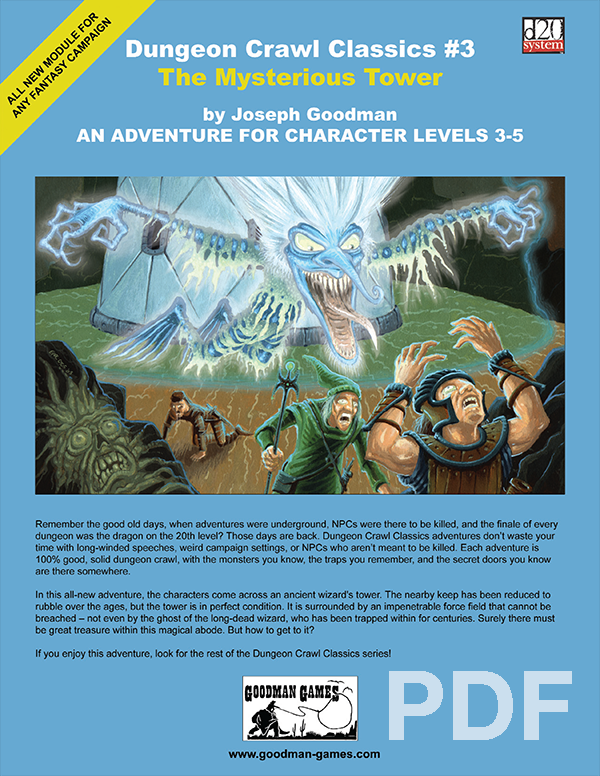 The Characters come across an ancient wizard's tower. The nearby keep has been reduced to rubble over the ages, but the tower is in perfect condition. It is surrounded by an impenetrable force field that cannot be breached - not even by the ghost of the long-dead wizard, who has been trapped within for centuries. Surely there must be great treasure within this magical abode. But how to get to it?