The wizard Kavorquian is dead. But certain items belonging to his adopted son were in the wizard's keeping at the time of his demise. Now someone must venture into the silent vaults of Kavorquian's stronghold and recover the missing property. Queen's Harvest picks up its story where B11, King's Festival, left off. It can be played as a sequel to that adventure or as a complete adventure in itself. It is tailored for beginning Dungeon Masters and players and contains helpful hints on adventuring and the land of Karameikos. The story develops simply, but ultimately leads the player characters into the nether reaches of Penhaligon's politics to confront Ilyana Penhaligon, mad pretender to the throne! TSR 9261 A goblin warband has found the secret tunnel which leads from the dwarven keep of Hearth-Home to the nearby hills. The tunnel is intended to be a means of escape if the keep ever falls to attackers, but now it has provided goblins with an easy way into the Underkeep. So far, the goblins have confined their attentions to the various underground rooms that make up the Underkeep, but sooner or later they will find a way to the surface. They pose a serious threat to Hearth-Home - the goblins must be cleared out of the Underkeep so this breach in security can be repaired before the orcs hear of it and overrun the dwarven keep. This adventure is slightly more challenging than Red Hand Trail, and it is recommended that it is played after that quest and before Palace of Dread. However, the scenario in Trouble Below can easily be played independently from the rest. Part of TSR 1076 The Goblin's Lair Lorena Appleton, the youngest daughter of the youngest son of the heir to the Appleton estates, went missing several weeks ago and returned with a mysterious illness. Her parents spent their vast fortune pleading to all doctors and clerics passing through their town of Braeburn, desperate to find a cure for their daughter. Several healers have said that they couldn’t cure her without knowing what caused the ailment, but Lorena hasn’t said a word since she fell ill. The story piqued the interest of Syvil Loganberry, an elderly Halfling Cleric from the nearby city of Brackenshire. But the roads between Brackenshire and Braeburn have become wild in the last century, and all manners of forest creatures have turned vicious against those who dare brave the roads. The upcoming harvest festival in Braeburn has increased security along the roads, but Syvil grew old by being careful and has hired your band of adventurers to keep him safe as he made the journey. The three days of travel go by without an incident, but those familiar with the woods may wish otherwise. The forest has been still, silent, without even so much as a bird’s song to keep you company. It’s as if the forest itself is waiting... 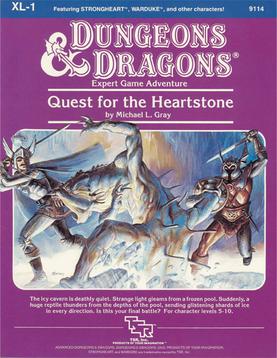 The King is dead! And the queen is in trouble. She has chosen you to find the fabled heartstone, which is buried somewhere deep in the Mountains of Ice. Is the gem I the hands of the corrupt Master Thief? Has he harnessed its powers for his own vile purposes? Or does it lie unguarded in the frozen ranges to the north, which teem with horrible creatures? This is your kind of quest! Quest for the Heartstone is a combined wilderness/dungeon adventure designed to be compatible with the Advanced Dungeons & Dragons Action Toys from LJN Toys, Ltd. and the Advanced Dungeons & Dragons Fantasy Adventure Figures from TSR, Inc. The adventure also includes complete maps, new monsters and players' illustrations. Will the heartstone be the key to peace in the kingdom? By her majesty's request... it's up to you to find out! TSR 9114 Nearly 100 years ago, Lord Eriador wrested the lands from the hands of evil and began a reign of unsurpassed courage, wisdom, and might that lasted over three centuries. One day this great man of valor was called onward to continue his battle for freedom and goodness on a higher plane of existence. Leaving the responsibilities of rulership to his faithful overseer, he donned his magical shield, helm, and sword and traveled to the Holy Maountain of Anduin to meet his destiny. Eriador left the overseer with this solemn promise: if there ever arose a time of great need, he would answer a summons from the Mountain of Anduin to come back to vanquish any evil that dared to oppress his people. It is now the reign of the third overseer. For years now, an evil mage has been plaguing the land by sending forth hordes of evil humanoid minions to oppress the people. The overseer has been forced to pay tribute to the mage to protect his people. Life has become nearly unbearable for his subjects. It has been over five years since the mage desecrated the holy mountain by placing foul creatures in its depths to guard against the possibility of the people seeking help from their nearly forgotten champion. A fortnight ago, your party was gathered in a secret council chamber to meet with the overseer himself. You felt a spark of hope for the people of this land as the overseer told the legendary tale of Eriador. He gave you the equipment you need and charged your party with the task of venturing into the heart of the now monster-infested Mountain of Anduin to call back the people's great hero, Eriador the Paladin. Although the three parties sent before you had not returned, ridding the of the land of the mage seemed worth any risk, and you eagerly set out on your quest. Now, standing before the defiled mountain, you wonder if perhaps you were too hasty.