Everyone who’s anyone has heard of Starburn Academy. The elite boarding school is famous for teaching students to excel in magic, history, fighting, and anything else a precocious child in the city of Seledor needs to know. But now, one instructor at the school is using his position to carry out a nefarious plot which is at best unethical and at worst deeply dangerous. The only people standing in his way are a mage with an unreliable reputation and the handful of talented children she picked off the street to infiltrate the school and get the evidence needed to take him down. That is, you. The wizard Abracadamus hid the Forever Stone in the darkest depths of a failing mine, coerced monsters into serving as guardians, and rigged the dungeon with traps galore. Then he died, as all good wizards do. Many heroes have fallen prey to the Forever Stone’s lure of immortality. To date, only one stalwart band has plunged into the Mines of Madness and lived to tell the tale. You think you’re better than them? You think you got what it takes to grab life by the stones and conquer the dungeon that won the 2012 Gygaxian Award* for Bonecrushing Awesomeness? We seriously doubt it, but go ahead . . . prove us wrong! Mines of Madness is a Very Special D&D® Next Adventure written for PAX East 2013 and designed for four 3rd-level characters. Dromar is a figure of power all over the realm. He is known as a legendary fighter from centuries ago. He was buried in a tomb along with an artifact of great power. Those who built his tomb were afraid of grave robbers, and so his tomb was created in the frigid, ice-coated lands at the base of a a mountain. The secret of this tomb's location has been passed among a select few people as the years have gone on. Most of the general public do not even believe it exists, but now the ancient relic buried alongside Dromar is needed once again. 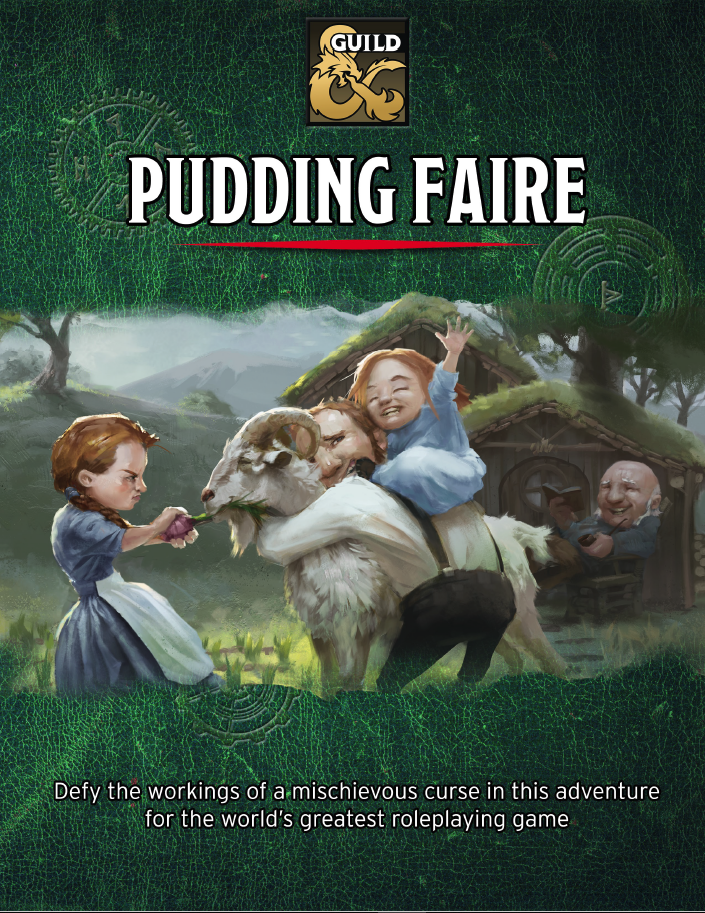 BREAK A CURSE THAT ECHOES THROUGH TIME! You awaken on the morning of the Pudding Faire: just as you did yesterday… and the day before that… and the day before that! To escape the loop, you must break a curse that strikes to the heart of halfling and gnome lore. Pudding Faire is a 3-4 hour Dungeons & Dragons module for character levels 1-4. It is part of a series of adventures that expands upon the material presented in Mordenkainen's Tome of Foes™. It can be played on its own or as a part of any D&D campaign. This product is a DMs Guild Adepts adventure! The Dungeon Masters Guild Adept program brings highly talented individuals together for creative development. Guild Adept products are identified with the golden ampersand and logo. Pudding Faire is legal for play in the D&D Adventurers League and has the following code: DDHC-MORD-04 This adventure is designed for the D&D Adventures League Season 5 - Storm King’s Thunder campaign, and is meant to enhance your party’s connection to important events and NPCs. It is intended for use during Chapter 3 and 4, where your party is roaming the Savage Frontier, and has material enough for 1-2 full sessions. It brings your party in contact with the mysterious Kraken Society, and introduce them to the Golden Goose coin, which will make your players more invested in the events of Chapter 11: Caught in the Tentacles.

Dragonbowl is a setting and pulp action adventure in one. It plunges a party into a rich festival scenario that revolves around a deadly gladiatorial contest, where the dangers they face in the arena are almost secondary to those they encounter in the murky criminal underworld they find themselves in: a world that stinks of corruption, human trafficking, illegal dinosaur-trading, necromancy, blood sacrifice and unnatural arcane experiments. The action takes place in a vast cavern in Mount Waterdeep, known as the Underbelly, where not only Dragonbowl Arena, but also an entire festival grounds – consisting of temples, bars, casinos, funfairs and markets - has been constructed to host this grand sporting extravaganza. With Xanathar, Jarlaxle, Davil, Volo and the Black Viper all in attendance, and scores of 'entanglements' (faction missions) to keep players busy, Dragonbowl can be played as a sequel to Waterdeep: Dragon Heist, or as a first step towards the Undermountain and the Dungeon of the Mad Mage. Equally, it can be played as a stand alone adventure, or easily transported into other settings. The adventure is written for a party of four 6th level adventurers, and easily customisable for three to five players, of any mid-tier level (the adventure contains maps and handouts adapted for both 4 and 5 player tables). The adventure is designed to last around ten to fifteen 4-hour sessions, but can very easily be shortened or lengthened according to the DM's desire. The adventure features all three pillars of play: combat (in and out of the arena), social interaction (a succession of parties and parades, where players can get entangled in NPC business) and exploration (30+ locations in the festival grounds alone).

The busy port city of Jute’s Landing is built into the white cliffs of a deep, protected harbor. It is an important trade stop for many ships and merchants, but this was not always so. Long ago this quiet harbor was home to a coven of hags. Jute Windbrow killed two of the three when he and his crew claimed the harbor for themselves. Evanore, the surviving hag, has lived for more than 100 years in disguise while the city grew up around her. The legend of the heroic Jute Windbrow defeating the wicked monsters has grown as great as her bitterness and desire for vengeance.

This adventure is scaled for level 1 characters. The ruins of a flying castle teeming with goblins is heading to the peaceful village of Barrowmist. It is up to the heroes to get up there and stop it before the castle lands in the village and chaos ensues. The group will enter into the ancient struggle between elves and orcs. Not only can they claim the ruins as their home, but the heroes will be asked to go on a quest to repair the castle and use it to find the Misty Isle, a legendary elven realm stolen by Gruumsh, god of the orcs. This adventure is the beginning of the Litany of Arrows adventure path. It can be run on its own or as a linked part to the larger story.

The lord of a local realm is having his council members systematically killed or cast out for treason with little to no evidence to support the claims. This has been occurring for some time and a local shaman by the name of Borjah thinks he knows the cause. In his visions, he has seen a strange spirit shifting the shadows, a puppet master using the lord as its personal servant by warping his mind. This entity is slowly gaining power in the city and increasing its dominance over Lord Kestyl. Borjah attempted to warn the council of this corruption, but all those he informed ended up dead a few days later, so now he is taking matters into his own hands . . . with a bit of help from some willing adventurers of course. Borjah has a few strands of Lord Kestyl's hair, enough to create a strange potion for the party to consume. A potion that will link their minds to that of the lord and be able to fight back against the corruption that has taken hold. All they need to do is wait until his mind is at its most vulnerable . . . when he is asleep. Then, and only then, they can plunge into the mind of this once nobleman and drive back the forces of darkness that threaten to destabilize the entire political landscape of the area. The potion is powerful. Dying while in this dream state cause such severe mental trauma that it usually results in the death of that individual in the real world, so the party will need to be careful. The rules of the normal world don't necessarily apply in the realm of dreams, and as they close in on the entity things are sure to grow more and more chaotic and illogical. Find out if your players have what it takes to fight back against an invisible evil using nothing but their strength of will! The goblin, King Tatter-roo, and his tribe are plagued by an unseen hunter. They have placed an unusual plea to anyone who will listen. The promises of goblin wealth and peace amongst the free people is attainable for a limited time only. All King Tatter-roo requires is an inquisitive mind and a sharpened blade. Nobody complained when the raids by goblins stopped. Until word got around that the monsters had been slain by other monsters! Our heroes have been sent to investigate and remove any remaining threat. Published by Fortiter Games.