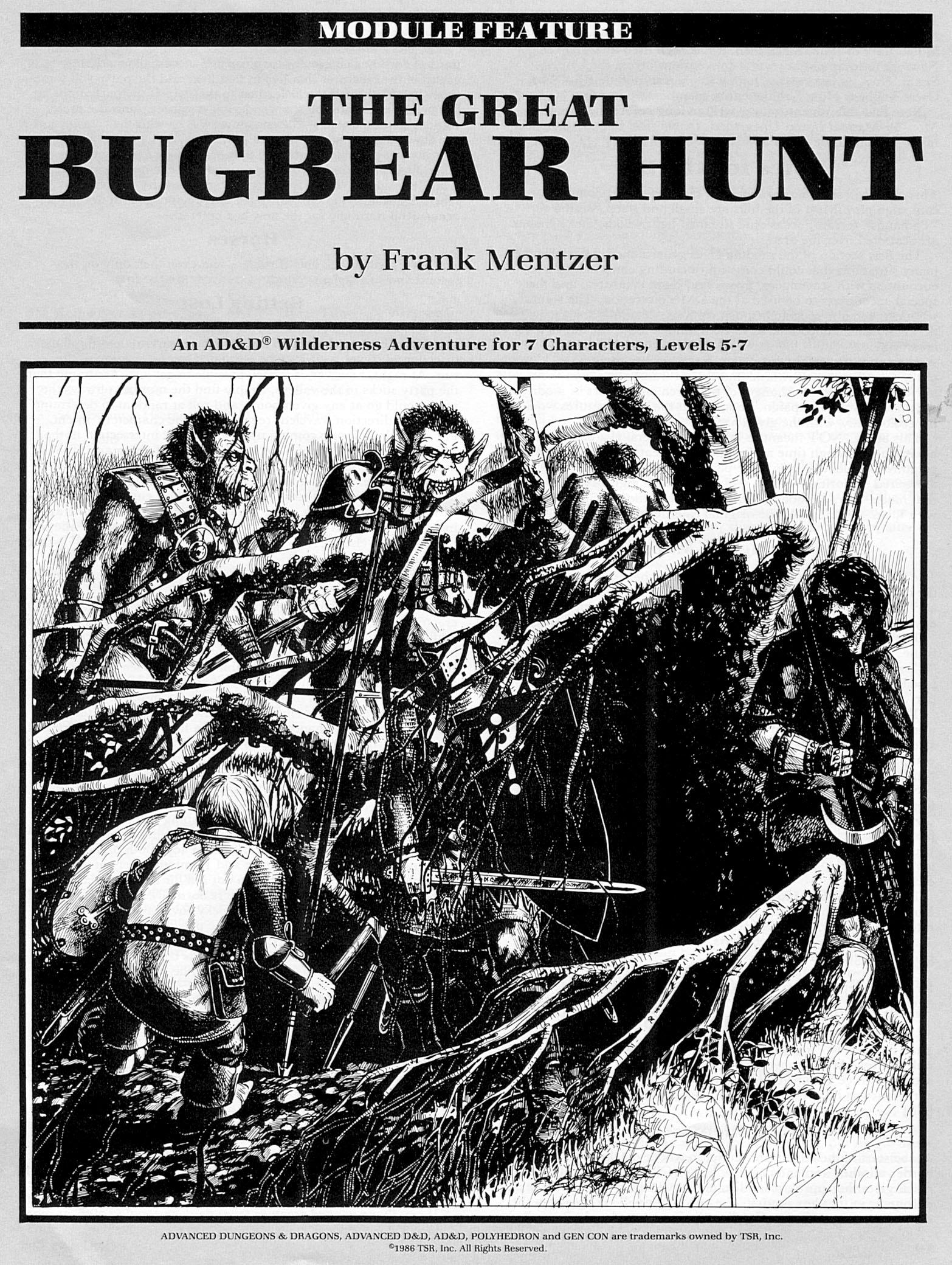 Your magic user friend has had his spellbook taken by marauding bugbears. He, and by extension you, are tasked by his mentor to recover the tome. Now you must track the goblinoids across the maze like hill country to find his stolen book. 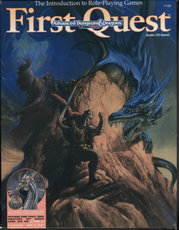 Part of the Mystara- First Quest box, this is an adventure designed to introduce new players and DMs to AD&D. The High Wizard Nethril asks the PCs to enter an old ruin and search it fro his missing apprentice. The ruin is not empty, though! Horrible things have moved in, so the search will be dangerous...

There your party is, having a few pints at the local tavern, minding your own business.....suddenly a fight breaks out! As you enjoy watching someone else take a beating for once, the town guards break in and stop the fight. A shriek and an old woman pointing her finger at one of the members of your party saying they have murdered the bar owner and now they are in custody. Can the other members of the party figure out the mystery and spring your cohort?

East of the great city of Filbar is the Village of Xer. This large village is the gateway to the Eastern lands and the humanoid tribes. Xer was originally the army base for the Bloodrayne Conflict of 715. After the battle the wounded returned to the serene woods and some remained after that. Since then it has been a comfortable caravan stop for many weary travelers. 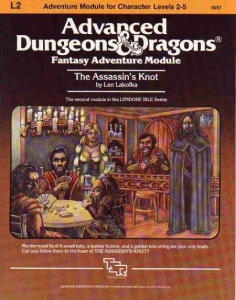 With your first set of adventures firmly under your belt you are relaxing and basking in the glory of a job well done. While at the local tavern imbibing in some well-earned spirits, a commotion can be heard outside. As you step outside the villagers are pampering two children who apparently just rode into town on a very sweaty and tired pony. An arrow is sticking out of the mount’s flank. As the animal is removed the townspeople pepper the children with questions as both are obviously afraid. It would appear the drinks will have to wait. 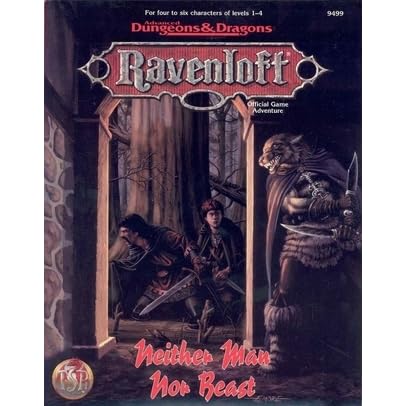 A ruthlus pirate has been terrorizing a local port and it is up to the party to hunt him down and capture his ship. 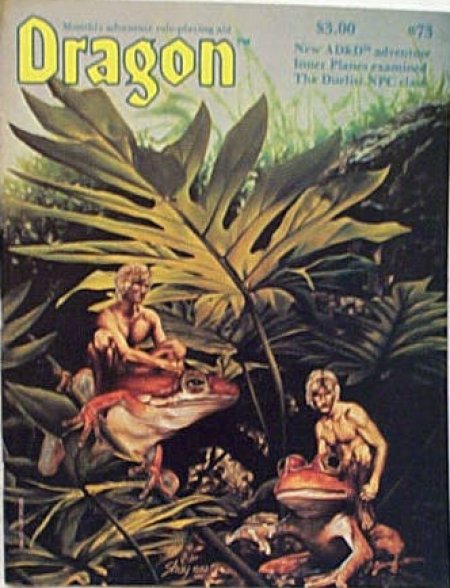 For as far back in time as the tales of history stretch, the area bordering what is now the Lands of Launewt has been a foreboding, practically impenetrable forest. When the lords who ruled the various borderlands united to form the Council of Launewt a century ago, the forest was in the same physical condition as it is now: thick, dark, and expansive, said to be so dense at the center that sunlight pervaded the foliage only on the brightest days. For a party of 4-8 characters, each of 4th-7th level

When adventurers are in the same area its nice to have a base of operations. The Village of Tomore rests between adventures pertaining to two different campaigns in the Filbar region. The quaint village has a caravan stop and will allow PCs to come into contact with a wide variety of personages and rumors for exploration. This area can be utilized as a base of operations near the areas of the FN or F series campaigns or just as a rest stop for the party. The Village of Hommlet has grown up around a crossroads in a woodland. Once far from any important activity, it became embroiled in the struggle between gods and demons when the Temple of Elemental Evil arose but a few leagues away. Luckily of its inhabitants, the Temple and its evil hordes were destroyed a decade ago, but Hommlet still suffers from incursions of bandits and strange monsters. Part of The Temple of Elemental Evil. TSR 9026

Disturbing shadows have grown long over the northern reaches of The Land of Song. The fierce people who once fished the chilly fjords and hunted in the evergreen peaks now huddle in their villages. An evil is abroad in the land. The heroes are charged by Jarl Yngvar with traveling to the Valley of the Sleeping Jarls, an old tomb in the hills where dead kings are laid to rest, to discover the source of the malevolence bearing down upon the land and with eradicating it. Who can say what evil lurks amid the towering peaks and shadowed fjords? For decades this malevolent being plotted his vengeance upon Hjalmar’s heirs, for the jarl had gone the way of all mortals. Taking for himself the name Mogens (“powerful”), this evil spirit, now a self-styled dark lord, gathered wicked cronies and servants to itself and came to the Valley of the Sleeping Jarls. There, he has spent nearly two decades corrupting and desecrating the sacred resting place, reshaping the hollowed tombs into a blasphemous temple to his infernal lord. 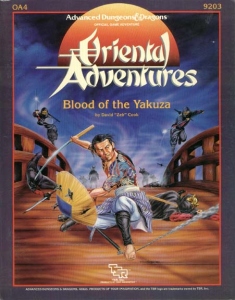 In the port city of Nakamaru, the masks of deceit and treachery embroil the entire city. Plots and counterplots, loyalties, revenge...all can be found in this city of Wa. You have been thrust amidst this cauldron of intrigue. You must pick your loyalties with care. Will you side with one of the yakuza gangs in their secret battle for control of the streets? Will you throw your fate into the political whirlwind that surrounds the powerful families of Nakamaru? Will you sohei battle his rivals for the hearts of the people? Blood of the Yakuza is an adventure for use in your Oriental Adventures campaign. It includes a colorful map of Nakamaru and descriptions of the major NPCs, districts, and factions of the city. All of these make Nakamaru an exciting and dangerous place for adventure! TSR 9203 "At midnight everyone will die..." Azalin the lich lord is launching another diabolical plan. He has allied himself with the entity known as Death, and together they plan to raze the domain of Darkon. From the ashes of the once-mighty land will rise a new domain - Necropolis, the land of the dead! For the citizens of Darkon, death has been an everyday companion, and sometimes a yearned-for end to suffering. However, now the cold comfort of the grave is forever denied these good men and women as they find themselves walking the land after their breath has left them. Heroes have always considered the undead to be mere monsters, legions of mindless evil to be slain with no second thought. Now the heroes will learn the agony of actually being one of the living dead. They become monsters, and the entire world becomes their enemy. Death Triumphant: A 64-page adventure that puts the heroes in the middle of Lord Azalin's ultimate scheme to escape from Ravenloft. Death Triumphant can be played as a stand-alone adventure or as the final chapter in the Grim Harvest series. Part of TSR 1146 Requiem - The Grim Harvest, from 1996