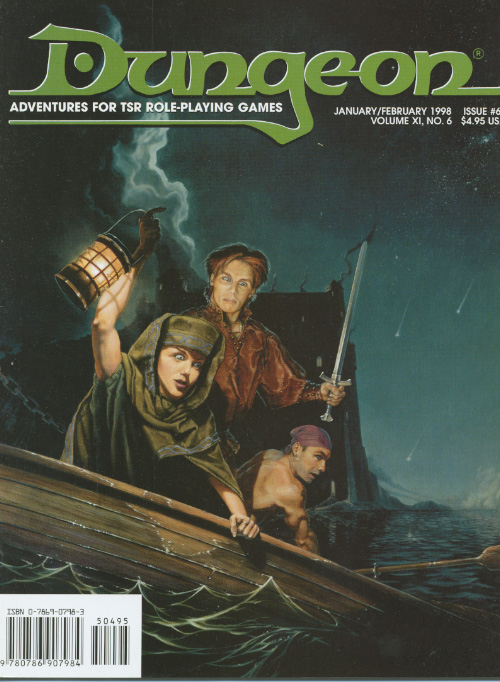 The sea has many perils. Are the treasures of a sunken pirate ship worth the risk? Arkos Seatamer, a privateer and the sole survivor of a shipwreck has gathered a new crew. He's returning to the wreck to recover the body of his closest friend, Devek Harpwind, for a proper burial. Arkos had rammed the pirate vessel 'Striking Shadow' in combat, shattering its hull. He leapt aboard the sinking ship to take the pirate queen as a prisoner. Shortly after, a sudden storm arose, so violent that it sunk his ship as well. This isn't the whole story. The pirate queen wore a cursed gold armband, shaped like a coiled eel. The sight of the band made Arkos mad with greed and he moved to slay her to take it. Devek tried to intervene but Arkos killed his friend in rage. With his dying breaths Devek laid a horrible curse upon Arkos to become a were-eel each night. The PCs are hired to accompany Arkos and his crew to the wreckage and recover Devek's body from the wreck, along with the armband he still lusts for. Pgs. 18-35

Tyger, tyger... A search for a small child in the woods outside of the town of Launise, a case of mistaken intentions, and the despoiled ruins of a forgotten goddess of magic. Cursed is the beast that stalks the Black Forest in... Orange and Black! Pgs. 66-71