A serial killer is stalking the unsavory citizens of Baldur's Gate and freezing them solid! Discover who or what is responsible for these chilling crimes and unravel the killer's twisted motivations in this adventure for Baldur's Gate: Descent into Avernus! This adventure includes: 1 New Neighborhood for any Urban Location, 1 New Creature, 3 New Magic Items, 5 New Shops & Taverns, and 12+ New NPCs!

Playing a Paladin can be an enjoyable experience especially with their vast array of powers and special abilities. One of their most overlooked abilities is their calling for a bonded mount at 4th level. Several scenarios are available for this "calling" including dreams, quests, etc. in the books but I have yet to run across any published adventures for it. This adventure provides one such option for gaining the mount and utilizing the Paladin's recent ability to turn undead as well. While this is a short adventure, it gives the DM an option to go one on one with a Paladin PC and challenge him/her in order to win their steed and a little glory as well.

The Thane’s Crypt is one of my original adventures created a very long time ago. That being said it has been dusted off and revamped a bit for an interesting solo adventure for a low level or novice PC. A fortress fell to the forces of nature decades ago and the dungeon entrance has recently been discovered by a shepherd. It pits the PC against other parties who have found the crypt area to find the fabled Amulet of Akar which is said to possess magical qualities. Can your fledgling PC brave the depths and come out a hero?

Displace Beast Maze is an adventure that has one long encounter that is a combination of a puzzle (maze) and combat encounter (Displacer beast). The Displacer beast tentacle's ability to attack through the maze walls, knowledge of the layout, and hit-and-run tactics make the labyrinth both a useful and possibly deadly lair for the creature. Pgs. 27-29 Over a millennium ago, a clan of dark elves broke away from their evil kin and fled from the city of Menzoberranzan. Though many lives were lost in the initial exodus, the large numbers of the renegade band ensured that they were more successful than any could have hoped. And yet, the drow that finally arrived into the surface world found themselves shunned at every turn by those unable to see past their appearances. Just as their hope was beginning to wane, a song rang out through the night, beckoning the way to the sea and to a silver ship waiting amidst the dark waves. Many years have passed, and little knowledge remains of the strange island that the dark elves came to call their home, but the wicked Lolth forgets nothing. Evil magic converges upon El’tara and begins to steal away the light of hope. Whether through fate, mere coincidence or perhaps divine intervention, a band of adventurers find themselves standing at the shores of this land in the time of its greatest need. This adventure should run for approximately four to five hours and may be played either as a one-shot or as part of an ongoing campaign. It contains guidelines for running the adventure at any level from 1st to 8th and for a variety of group sizes.

Throughout the course of a campaign there are some sessions when you just don’t have enough players and need a “side trek” to salvage the day. While many times it’s a throw away session this adventure brings in the underused festival experience. From royalty to commoners everyone likes a good break from the daily grind. This packet lays out a basic festival experience with vendor options and actors. While no “adventure” is present it provides a good base with which to work with. In one of the Filbar Campaigns this festival gave the PCs an opportunity to come face to face with one of the nemeses without knowing until it was over. It also gave them rumors from the carnival staff of the location of a much sought after item. Just two of the possibilities for a successful one-shot adventure!

While at times cliché there are few adventures better than an old fashioned trek into the ruins of a deserted castle. This adventure pits a new adventurer against the decades old remains of a hilltop castle that is “haunted”. The old keep was the site of a mighty battle years before that swayed the power in the area but now it is the crumbling remains of the once powerful Baron Sancrist. While the old fortress is supposed to be deserted the area farmers and villagers swear they have seen the dead walk the parapets in the moonlight. Well you wanted adventure….here it comes! 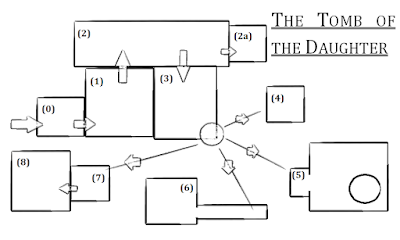 The adventure text was written by a neural network (Talk to Transformer) and compiled by a human editor. It is surprisingly usable. The adventure is centered upon the dangerous and thoroughly weird Tomb of the Daughter, the burial place and temple of an ancient Goddess. Explore several rooms connected by teleport systems, fight strange creatures, and perhaps thwart a demon summoning.