This week’s Filbar offering is an introductory level adventure pitting fresh adventurers against a variety of opponents. As they head out to make a name for themselves the young group will first need to pass by the Horn of Delmar. This mountain landmark was once home to a mighty fortress felled centuries before hand. While many have adventured to the top they have returned ravaged with injuries and reports of strange and foul creatures. This adventure features an old tower, bandits, undead, and an old dungeon complex for those who search hard enough. 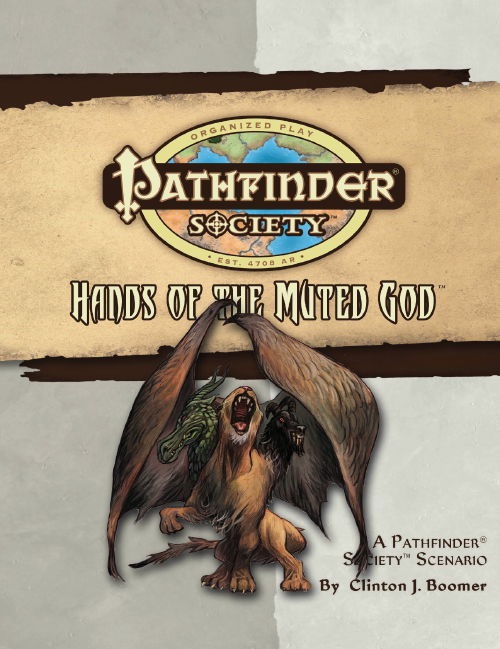 A Pathfinder Society Scenario designed for 5th to 9th level characters (Tiers: 5–6 and 8–9). When the man who would be the Muted God wordlessly stepped beyond the gates of the Starstone's Cathedral, his thousand and one faithful ringing the Ascendant Court watched with the silent contemplation that is their highest sacrament. When he failed to emerge, many of his penitents abandoned their vows but a small sect remained loyal and worshipful. You and your fellow Pathfinders are sent into the mountains north of Absalom to follow the path of a doomed party and uncover the secrets of the Muted God. His loyal band of followers, called the Hand, will stop at nothing to keep you away from their shrine—even forming an alliance with some of Golarion's most evil denizens.

X11 Saga of the Shadow Lord consists of two linked adventures as a mini-campaign: In the first adventure called Elvenstar, PCs try to steal a magic item from the Shadow Lord to thwart his planned invasion of a peaceful neighboring kingdom. Encounters in this adventure include a village populated by adventurers, and a cloud giant living in a small castle, before the party reaches the Shadow Lord's lair for the final encounter. In the second adventure, also enclosed in module X11, The Halls of Drax Tallen, the Shadow Lord returns more powerful than ever. His undead minions are searching for another magical item to give him immense power and the PCs must find this item before he does. Player characters must get past the undead army of the Shadow Lord and infiltrate his haunted fortress to retrieve the magical Elvenstar. TSR 9165

This area of adventure is a continuation from FV1 – Jeopardy Caverns and picks up where the party left off. If your party discovered the “back door” this is where it leads. It also offers an opening that flanks Jeopardy Caverns that has a perilous rope bridge to navigate! This area provides multiple smaller adventures and was utilized to get the party from different adventures. Portions of this adventure can be used as fillers in your own campaign. I hope you enjoy it as much as my players did!

A Giant Ransom is a short adventure for four 11th-level characters. There are opportunities for diplomacy, stealth, and combat, based on the choices the PCs make, so any mix of classes is appropriate. The adventure can be set in any campaign world, in a frontier region near glacier-covered mountains. In the first episode, the PCs were employed by Duke Ambrinigan to exchange a ransom of 10,000 gp in gems for a golden lion that was taken by frost giants in a recent raid. While waiting for the giants to arrive at the designated meeting place, the PCs watched as the white dragon Whildenstrank attacked the giants and then flew off with the statue. Charged with returning the golden lion statue at all costs, the PCs dealt with the remaining frost giants and then headed west, toward the lair of the dragon in the midst of the nearby glacier. Along the way, they encountered Velg the Dragon Tamer, another frost giant who was also on the trail of the dragon. Velg may or may not be with the party now. The PCs are now traveling across the flat icy surface of the glacier, and may have just noticed something burrowing under the ice, heading straight toward them.

This adventure was featured at GriffonCon in South Bend in 2016. Two countries are uniting for a wedding when one of the most important gifts of the union is stolen. Without the dowry of the 40 Golden Eggs from Lord Griffon the wedding will not occur and war will be the likely outcome. A quartet of the most loyal warriors has been sent into to Chromatic Canyon to deal with the bandits and retrieve the items! This is an “EGGSELLENT” adventure for convention tourneys!

OP6 – Haunted Hill is a special, Halloween release for Adventures in Filbar™! It was created to give a single, first level player an opportunity to prove themselves to their mentor. After years of study you decide you are ready to get on with your adventuring career but your trainer wants you to prove yourself. After a courier goes missing, you have been tasked to go to the region of Haunted Hill. This area is well known as an old cemetery and haven for miscreants. Your task – go to the area and search for the missing courier and recover the package he was set to deliver!

Adventuring in the Principality of Lockerbie continues with Issue in the Canyon. Your party has enjoyed the advantages of being considered a hero but as the days’ progress, it is back to normal in Gormell. After having a bit of ale at the local tavern you notice a wagon caravan has arrived in town and the people are abuzz over their arrival. Noticing that some of employees are a little beat up, you find yourself in the sheriff’s office being told of a brazen, humanoid attack on the merchants. Looks like you just found a job opportunity! An evil order of wizards is terrorizing local towns. It is up to the party to find their secret lair and put an end to their nefarious plots 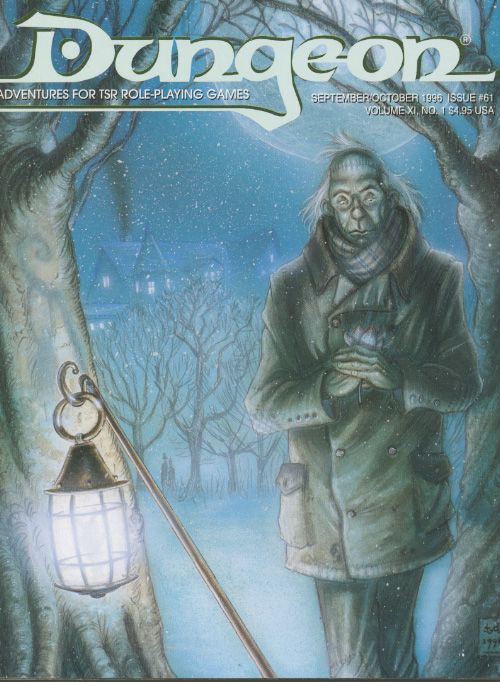 The company discovers the Easterly Inn, a piece of the Shire in the land of the Beornings. But the Wild is still the Wild, and it takes more than Hobbit cooking to keep adventures at bay; in no time, the companions find themselves involved in the search for a missing trade caravan. Their quest will put them on the road to the High Pass, and see them go over hills and under hills. 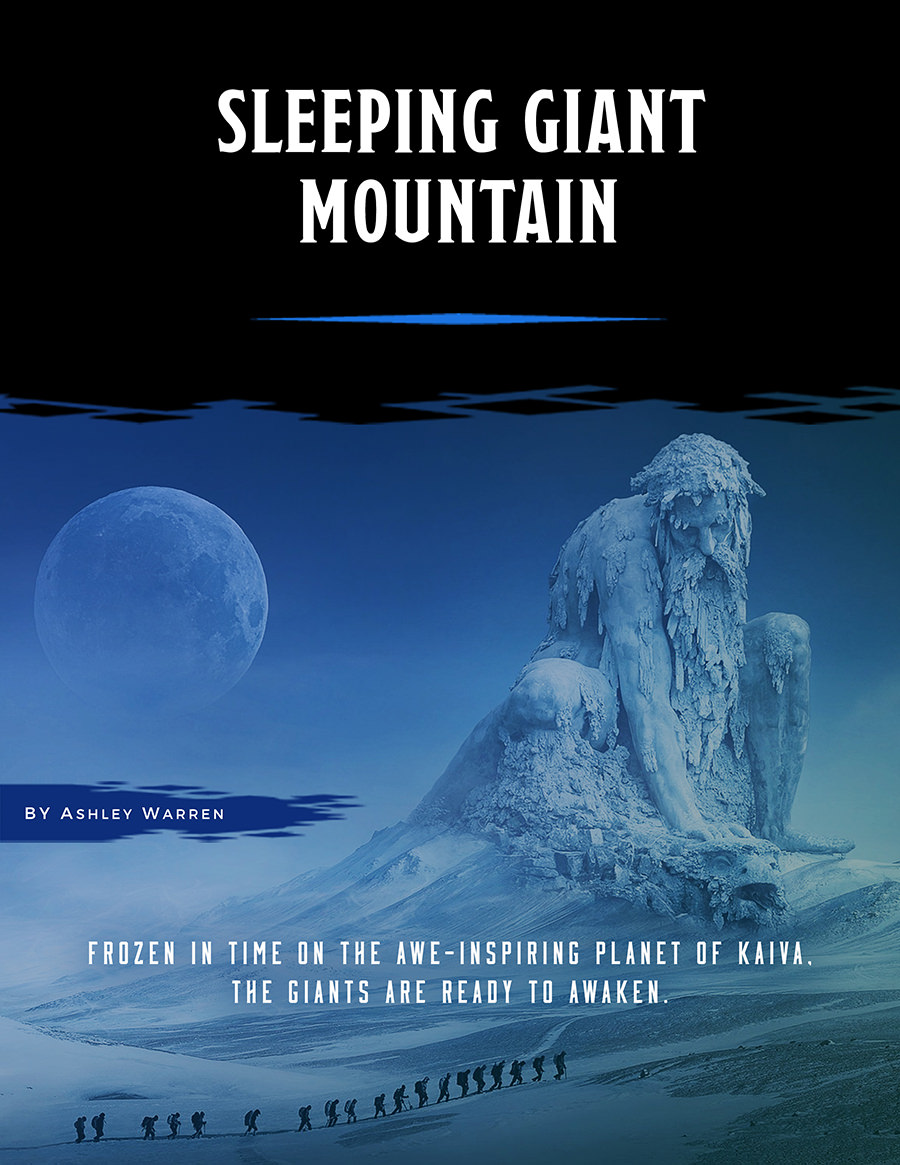 Kobolds. To some, that name means “a tiny creature that dies easily”. To others, that name invokes fear and dread of a relentless, diabolical nightmare. This adventure introduces you to the latter. If your party is unlucky enough to enter the kobold-infested mountain, they will wish they hadn’t after triggering traps around every corner. And if that doesn’t discourage them, the red dragon surely will. A 6-8 hour adventure for 6th-ish level characters Mount Black. A mountain filled with a myriad of creatures’ lairs, a crippled dragon that wants to control it once again, and a friendly kobold who can guide you to glory - for a price.

For years the Verbeeg clan on Clover Island has lived peacefully with the human settlement of Corsair Bay. A peace treaty has remained in effect that both groups attested to and have lived by. Recently the annual tribute that is to be paid to the giants has not come and now the giants are preparing for battle. Can your party go and act as an envoy to the giants or will they choose to go to war against them?