The Five Cities are dying. Their water sources are drying up, and the brightest of their youth are leaving, lured out into the desert by an unknown power. Enaxi, the unifier of the Five Cities, now a lamia, is weary of watching their descendants ruin their great works. The Council won’t let young people restore the Five Cities to their former glory, so Enaxi is gathering them. They’ll start their own paradise and doom the Five Cities… unless the heroes can convince them otherwise. In this adventure players are set first on a simple task, to solve the disappearance of the local witch before outside forces take an interest. But as the players get deeper, they will rapidly kind themselves on a quest for far more, as they range from an alchemist's lair on a crumbling tower down to a dark swamp full of mystery and danger, seeking a holy relic that might lead them to the outskirts of Hell itself. All in service of the sleepy Village Sujeira and the dusty souls within. 1452: Saving Sujeira’s Soul is an adventure set in northern Portugal on an alternate history Earth during the year 1452, in a world where history is much the same, but for the fact that the Rus are all hirsute dwarves, the hordes that poured out of central Asia were orcish (and half-orcs are mostly janissaries split among the Ottoman Empire’s demesnes), and elves are creatures of rumors and myth. Halflings live among the English and Portuguese in villages and farms, while goblins are pests best left for dead in the wilds between civilized countries. The Church arms its inquisitors with holy blessings, for witches are not mere milk-souring old women but vile devil-pacted souls, and wizards and sorcerers seek human and kine for sacrifices to fuel their darkling magics. There be dragons on the edges of the world, and ogres and sea serpents and giants, but the alchemists of this world know things beyond mortal ken and fight these horrors with science and canny concoctions. In this adventure, the PCs find themselves in Urik, perhaps as a result of the war between Tyr and Urik that took place in Road to Urik. There, they become involved in a ritual meant to help a nascent Avangion (a very powerful wizard/psion of a generally benign type) reach the next stage of its development, but the ritual is interrupted by Urik's templars. The Avangion-to-be is left in a cocoon, and the PCs are tasked with bringing it to a new location in the wilderness where the ritual can be completed. They need to get the cocoon to the ritual location before it's too late, while evading pursuit as well as dealing with any wilderness dangers on the way, plus the evil machinations of a raiding tribe seeking the wizard for their own dark purposes. The adventure is fairly rail-roaded with a series of set encounters between points A and B. Like other Dark Sun adventures, it comes with a set of handouts. Unlike the previous adventures in the series, Arcane Shadows is not tied to the Prism Pentad novel series, nor is it really tied to the previous adventures. You can easily play it as a stand-alone without affecting the earlier ones.

Legends of a "mountain of gold" provoke a mad scramble for a mysterious book laden with clues to find certain statues around the city, which themselves hold additional clues leading to the hiding place of the fabulous treasure. An adventure for 3-5 characters of 1st to 4th level using old-school advanced rules with twists and open-ended problem-solving in a city rife with overt treasure-hunting and covert Byzantine plotting by multiple factions. An extended campaign for the Midnight setting from Fantasy Flight Games. Crown of Shadow is a desperate quest across Eredane, ranging from the depths of the Kaladrun Mountains, across the grim expanse of the occupied plains of Erenland, through the secretive underground of the Eren River, and finally into the heart of the Whispering Wood itself.

A plot to end the reign of an evil king leads to the characters being trapped in the wizard's maze! Can they escape? An adventure designed for 4-7 characters of 1st through 3rd level. This module is the first of a series of High Forest adventures. It includes a description of the village of Merric, including detailed NPC's and approximately 8 hours of play content. Merric has always been at risk of raids by the local Gnolls, but now word has come that the Orcs of the Greypeak mountains are massing to invade High Forest. The elders of Merric have decided to hire and groom an adventuring group to ensure they have a balancing force against the invasion. Soon it becomes clear that there is something far more dangerous than Orcs threatening High Forest and if the children of Merric will ever be safe again, someone needs to stand between them and the evils that lurk in the dark.

In “Rescue at Rivenroar,” the player characters must brave the depths of ancient catacombs in search of prisoners taken from the town of Brindol in a midnight raid. The hobgoblins, bandits that style themselves after an invading horde from long ago, have taken refuge in a dungeon under a ruined mountain fortress, and the PCs must clear them out to find the captive townsfolk and the treasures taken from Brindol. “Rescue at Rivenroar” also marks the first step in a great journey - the Scales of War Adventure Path, which spans 30 levels and put the PCs at the crux of events that shapes the world for centuries to come. While the scope of this adventure isn’t as grand, it represents the seed from which an epic tale will surely grow. You and your associates have been contacted by Janko Milosh, fourth Earl of Tambish. Apparently, he has come into possession of a cursed item and he requires it be delivered to someone he trusts to examine it. With no mounts and none for sale, you better hope your boots are in good shape! A treasure map leads to deadly peril amid the remains of a lost civilization. NOTE: The Tales of Freeport that contains this adventure is NOT one of the versions currently available in the Green Ronin store. Those contain short stories. This is an older item that appears to no longer be available from Green Ronin. It is possible that the adventures within it have been included in other products since then. But I have linked to the original product on DriveThru RPG. 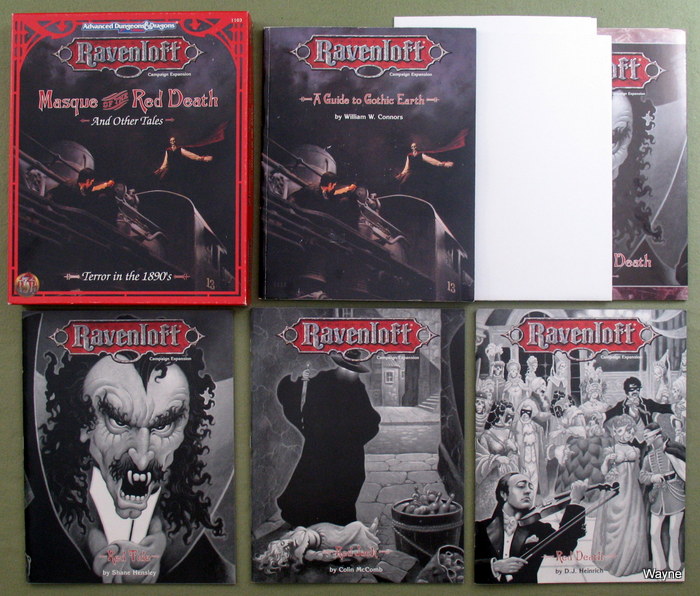 An isloated mansion hidden in the mountains of eastern Europe is the setting for this 32-page drama in which the PCs must face death itself. TSR 1103, From 1994

Old soldiers never die... For more than three decades, Dr. Rudolph van Richten stood against the forces of darkness, and hunted their servants in the far corners of the land of Mists. Now he had thought his long battle over, had thought he could spend his declining years in quiet enjoyment with old friends. But for some, a tragic end is inevitable. Dark forces have been gathering in the Mists. Their objective is to see Ravenloft's foremost expert on the supernatural destroyed, shattered in spirit as well as in body. From the crumbling edifice of Van Richten's childhood home, an enemy long thought vanquished spins a web of powerful evils and lost souls, drawing Van Richten to his doom. And then a group of heroes gets trapped in the web as well. . . . Witness the final stand of Rudolph van Richten! Inside this box is a grand-scale Ravenloft adventure that pushes heroes to the brink of madness, and draws them into the terrifying scheme to annihilate Rudolph van Richten. TSR 1141 Fort Akor has come under attack by a dragon, but when the PCs seek out the beast in the surrounding jungle they discover the dragon may be the least of the fort’s troubles. The Pcs travel to Fort Akor, where they learn that the fort has been under attack by a dragon (which is really a tyrannosaur). Prince Henri asks the PCs to slay the dragon attacking his fort before it causes further damage. If the PCs investigate the fort before setting out after the tyrannosaur, they may discover the hidden corpse of its hatchling. They may also discover the truth behind the fort's dark history. Tracking the "dragon" to its lair and slaying it for Prince Henri forces the characters into conflict with a faction of the centaurs living in the jungle, who disposed the hatchlings corpse at the fort. Discoveruing the truth of the prince's conflict with the jungle natives might lead to an alliance.