Many of the local lords had gathered for a peace moot. A perfect opportunity for the demon-possessed Aeldrith Forkbeard to murder them all in cold blood. The PCs, attending the moot, must now flee for their lives. Harried by a Northlander warband, the party is forced to flee into the dreaded Witchwood. To reach the safety of the Kingdom of Marshes they must traverse the depths of the forest, avoiding Northlander raiders and the strange creatures of the Witchwood. The adventure also takes the PCs into the Feywild, where time runs strangely and memories are fragile. Finally, they must face the chilling Gatekeeper guarding the Feywild portal that allows the PCs to return to the Material Plane. Into the Witchwood is a generic adventure suitable for use in the Moonshae Isles. The adventure includes a map of the area, three new creatures and a new legendary magic item, the Circle of the Forest God. It's feeding time at the zoo and you could be the main course! Raven Aldritch, mysterious and beautiful, runs the Aldritch Research Centre and Zoo for her father, a powerful mage. He enjoys turning dangerous creatures into terrifying monstrosities. But daddy is away and the magical shields that hold the creatures in their enclosures have failed. These monsters are rampaging through the research centre endangering the lives of the innocent workers. Raven desperately needs help to regain control, and she’s willing to pay the right group of adventurers handsomely. Will you come to her rescue? An adventure for the world’s greatest roleplaying game. Fifth edition compatible. A one-shot for a party of Level 3 adventurers For those who trekked through Jeopardy Caverns and Urgoth’s Canyon a short trip to the north will land them on FV3 – Road to Kak. From this location the party can continue on their quest of fame and fortune with a variety of different encounters. Much like the canyon adventure this one presented different options of travel for a group of young adventurers. A whimsical, urban romp inspired by the works of HP Lovecraft, Neil Gaiman and TS Eliot. Meet a host of strange and new characters such as the Worg Lord and the Wayside Oracle, while exploring Neverwinter's famous Clockwork Carnival and the notorious Sideshow Alley. This tongue in cheek adventure brings new PCs into a small town after an adventure. Upon arrival they quickly discover that the small agricultural community has just been robbed of its harvest supply. With the seasonal change coming those supplies are necessary for the town’s survival. One of the victims of the attack was an alchemist. Contained within his bag were a few Potions of Growth. The bitter taste of the potion disagreed with the bandit who discovered it and he flung it into a field. Unfortunately for the PCs oversized fowl must be overcome before dealing with the bandits. Used as a fun one-shot for my group this scenario can be quite deadly if played poorly. Will your players save the day and feast on a Giant Turkey? Gobble this adventure up for free! 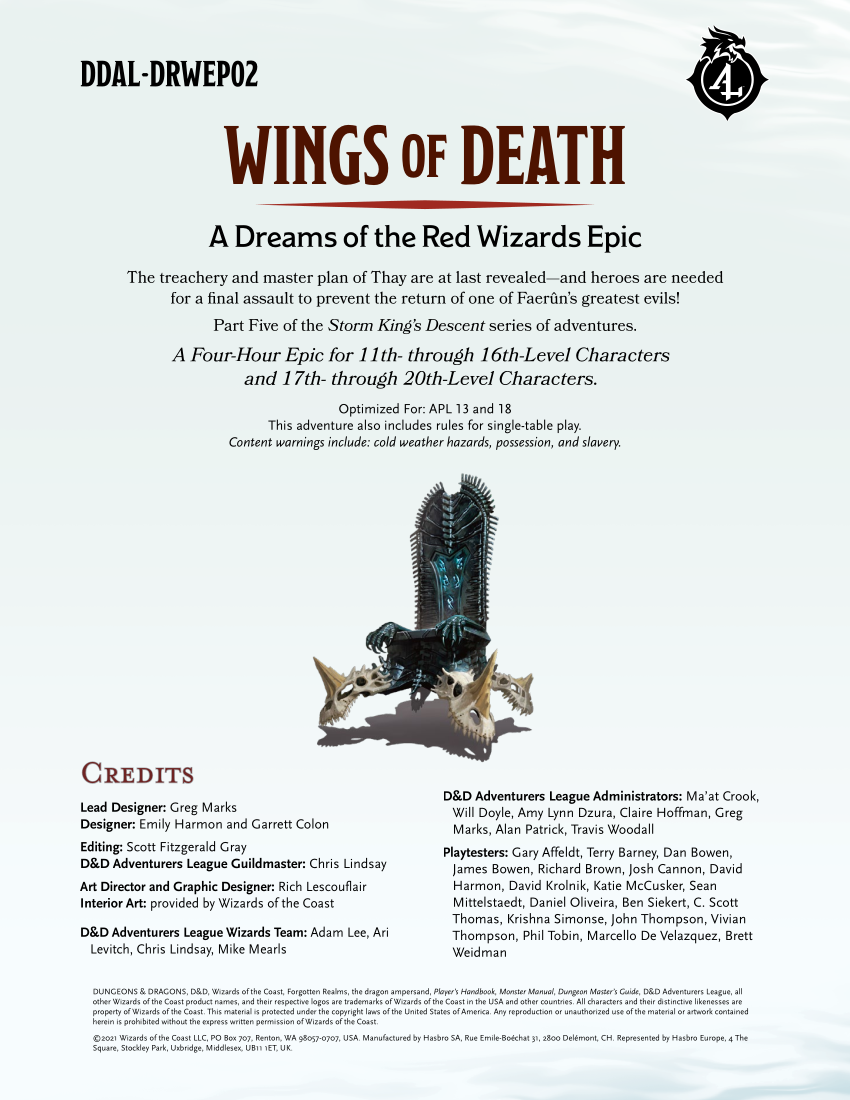 A Dreams of the Red Wizards Epic The treachery and master plan of Thay are at last revealed—and heroes are needed for a final assault to prevent the return of one of Faerûn’s greatest evils! Part Five of the Storm King’s Descent series of adventures. A Four-Hour Epic for 11th- through 16th-Level Characters and 17th- through 20th-Level Characters. Optimized For: APL 13 and 18 This adventure also includes rules for single-table play. Content warnings include: cold weather hazards, possession, and slavery Imprisoned in the first layer of Hell a group of unfortunate adventurers must find their way out amidst the chaos of the Blood War. Will they escape before the Lord of the Keep finds them? Well, only time will tell... 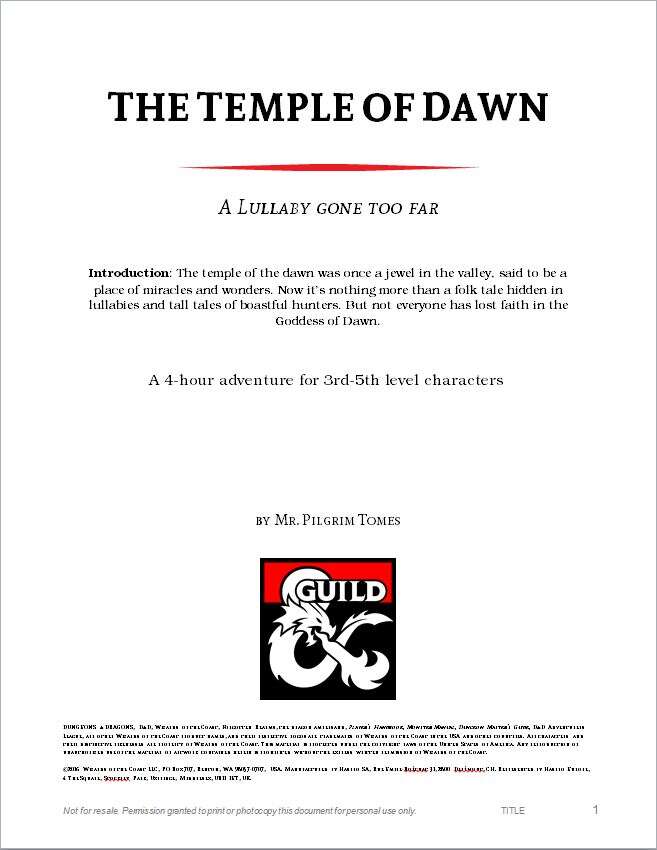 The temple of dawn was once a place of miracles and wonders, the jewel of its valley. Now it’s nothing more than a folk tale hidden in lullabies and tall tales of boastful hunters. But not everyone has lost faith in the Goddess of Dawn. In this brief adventure, for 3-4 adventurers of level 3-5, Kendrick Rosenbud asks the players to retrive a gem belonging to his family from the temple of Aurora. After some days of travelling the party reaches the temple. from here on out its the players job to discovere the hidden room with the gem and take it back to Kendrick. The Nobriskovs are a proud and pious noble family beset by troubles they wish to keep quiet. When their angelic daughter is abducted by duergar slavers, the player characters are asked to surreptitiously rescue her from her captors. However, the distinction between predator and prey blurs as they discover the noble scion's secret. What's included? 1 hair-raising adventure divided into single-page sections for easy running 3 fully-colored maps with unlabeled versions for players (made with assets from 2-minute Tabletop) 4 statblock variations for cursed creatures in addition to detailed mechanics on implementing a more virulent strain of lycanthropy 6+ ending permutations based on what the player characters do and how they do them Content Warnings: Violence, death, abduction, slavery, horror