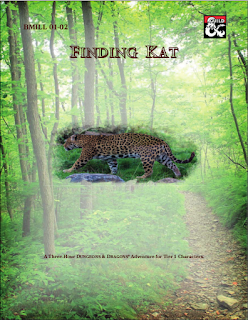 The characters are introduced to the coup occurring in Whitehorn and are tasked with warning a friend, whose family is involved, about it. (characters can choose one instrument as a reward) In the Tower of Yladhra the Grim, a party of adventurers braves the dangers and puzzles of an enchanted wizard's tower, and finally confronts the wizard herself. The adventure is designed for a party of five adventurers between levels five and eight. It features: Encounters by Level - Varying types and quantities of creatures are suggested based on the party's actual level, allowing each encounter to present the appropriate challenge to the party. Encounter Notes - Suggestions for how to run combats are provided for game masters who place an emphasis on engaging, tactical battles. Inciting Action - Suggestions for ways to present the adventure to players are provided. Aftermath - Ideas for future adventures based on this one. Unique Magic Items - New magic items to introduce into a campaign. Ease of Use - The format and style of the document allows the game master to find information quickly while running the game at the table. Detailed Maps - What's an adventure without maps? Not much else to say here. The Horror of Horticulture Valentine Manor is beauty entrapped in architecture. The lavish stately home is renowned throughout the realms, and its gardens even more so. However, despite its famed beauty something has found its way into the garden and corrupted its allure. Could it be something to do with the new gardeners, or something even more sinister? Free adventure! In the fourth installment of the Into the Underdark adventure series, characters come face to face with the heretofor unseen puppet master behind most of the strife and chaos in the Shadowed Hallows, Gyldrith the Chosen, a dreaded deep dragon! Includes: Three all new maps of Gyldrith's lair, and those of her minions Two all new monsters, the Ancient Deep Dragon and her Warlock of the Deep Dragon A new player option, the Deep Dragon patron for the Warlock Class. Unnumbered maps suitable for use in your favorite VTT Continues the story from Into the Underdark Part 1 - The Descent with areas and NPCs from The Shadowed Hollows Gazetteer

A Scarred Lands Adventure. Maghiel has learned the location of the staff of Zuvys and has devised a way to use its power to aid her in summoning some strange fiends known as the “Mouths of Vangal”. What purpose she has in mind, what part this plays in her plan, only she can say. She has sent her henchman, a twisted wizard named Anuzor Okalis, to fetch the staff of Zuvys by whatever means necessary. Anuzor has used his magic to charm, disable, or destroy the Order of Silver guardians, and has penetrated the inner sanctum of the shrine. A Vengeance of the Shunned Side Quest The Staff and the Secret Shrine is a side quest that can be played standalone or used with the Vengeance of the Shunned campaign. Over 20 community content creators have banded together to bring a full-length campaign to the Slarecian Vault! Vengeance of the Shunned takes your adventurers across Ghelspad on a quest to end the greatest threat to the world since the Titanswar! This campaign offers adventures from levels 1-15, and will be releasing new content weekly ALL SUMMER LONG! Vengeance of the Shunned continues with A Titanic Feast by Jeremy Hochhalter! Published by Onyx Path Publishing

Unravel the Mystery of the Darkside Brewery. Designed to be a fun, 5E adventure themed (loosely) around Cinco de Mayo... and the time magic called chronomancy. The Story. Nearly thirteen years ago, a powerful magic gripped the Darkside Brewery and sealed its doors. No one went in. No one came out. A few days ago, those doors reopened, releasing a silver mist that temporarily aged all it touched. Yet nothing else emerged. What happened to all the workers and visitors within? What could have caused the silvery mists? How could the doors have remained sealed for so long, and why have they reopened? Do you have the courage to figure out what happened within the Darkside Brewery? Gather your allies and find out! Are long journeys through Wildspace getting you down? Too much time on your hands? Sick of catching the same old Scavvers? Why not pay a visit to Starfish Bay! Break out one of the five new lures and see what bites! With 25 new fish to catch you'll be busy for weeks! But watch out, not all of them are so easy to hold onto! This small sidequest has 8 new monster stat blocks along with 1 encounter with some 'hungry' Hadozee! Travellers are going missing on the Long Road, on the 100 mile stretch between Triboar and Longsaddle. Our heroes investigate and discover a haunted mansion with a dark history and a gruesome secret. Their quest brings them to the very gates of hell itself, where an infernal abomination presents them with their greatest challenge yet... Inspired by a Clark Ashton Smith story. "I was taken by the evil dogs while camping near Agav's bog. They dragged me into their lair, and it wasn't until I escaped that I knew the truth of the place: a great and bony wing buried in the side of a hill. They chained me in the dark with a candle made from foul wax and forced me to dig at the marrow. Their bonds were poorly made, and I fled several days later while they slept. What purpose did they have in mining that marrow? I cannot say..." The Marrow Mines are dug in and around the fossilized wing of an unnamed leviathan. A small pack of kobolds lives and works in the mines, which are heavily trapped. The kobolds defend the area fiercely and patrol the region around the mine. At night, a handful of urds make aerial surveys of the territory. The urds live in the deep reaches of the wing's tips.