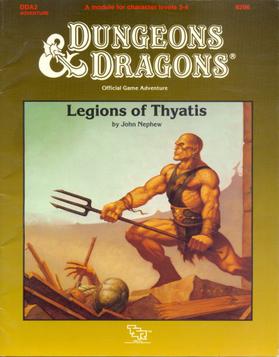 Revolt of the Gladiators! The corrupt Thyatian senator, Helenites Osteropolus, his latest scheme smashed by the adventurers and their gladiator allies, hatches a new plot to destroy the influence of the Order of the Sands (even, perhaps, to attack the Emperor himself!) Yet greater dangers lie ahead. If his plot succeeds, it will remove the guardians that protect the city from the creatures that lurk in the caverns and catacombs below. Can the players block his gambit? Will the wheel of justice grind small, or will the greasy palm of political corruption reach out and save the senator once again? You decide, in the chaotic swirl of the Thyatian capital's politics. This module is designed especially for the DM who wants to sharpen his interactive skills. Recommended for four to six characters, levels 3-4 Includes map of a realistic catacomb complex below Thyatis City Unique role playing climax tests players' integrity and skill New information on the military Legions of Thyatis This module is a stand-alone sequel to DDA1 Arena of Thyatis. TSR 9296 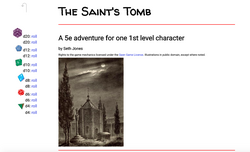 The Saint's Tomb is a single-player gamebook-style adventure that is playable in your browser. You make a 1st level character sheet, roll your own dice (though 2 of each are supplied in-browser), keep up with your inventory, spells, and HP, and click on options as you make decisions. It was written to help new players learn the game, but it should be fun for experienced players too. In the game, you'll investigate a mysterious figure who has a suspicious interest in the tomb of a dead priest. You'll battle the undead, figure out problems and roll the dice to save your city! The Saint's Tomb is free, though you can leave a tip if you're able by clicking "Support this Game". A Spanish translation is available as "La Cripta Sagrada" 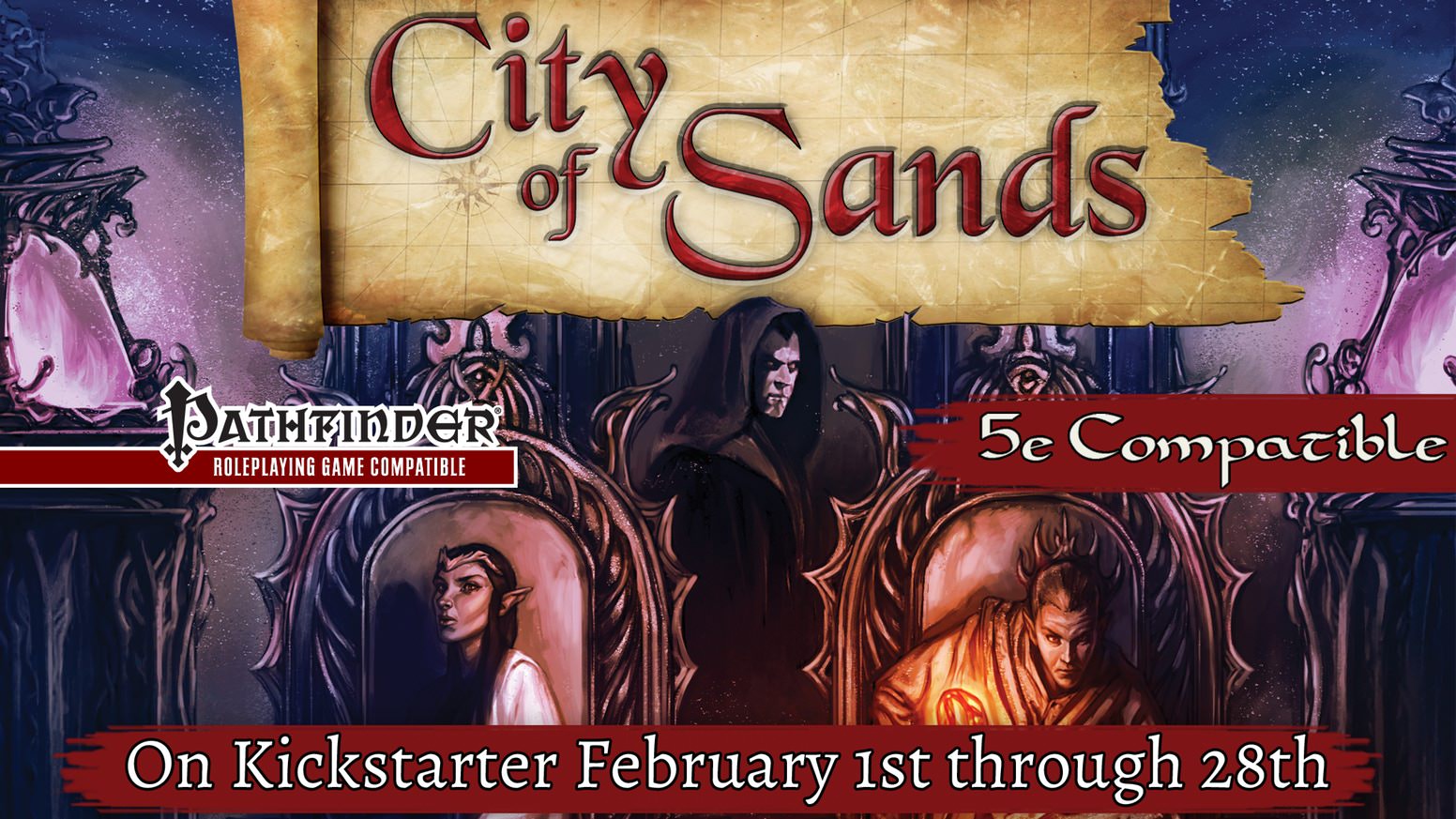 The duchy of Velen is a bastion of law and order in an otherwise untamed land. Its ruler, Duke Calchais, holds his citizens and visitors to his city to a high standard of conduct. When Velen's harbormaster is murdered, the duke enlists the aid of adventurers to see that justice is served. Was the harbormaster a victim of larceny gone awry, or is something more sinister afoot in Velen? Murder in Velen is a 4-hour standalone adventure set in and around the port city of Velen, which is located in the peninsula nation of the same name in southwestern Faerûn. Velen is designed for a party of five 10th-level player characters, but it can easily be scaled by adding or removing creatures.

SQ2 – Cesspool of Redrook takes a group of initial adventurers on their first challenge. Your new group wants to be big-time adventurers but don’t really have the money to wander out from the safety of the city of Redrook. As you question your options a wanted poster gives you just the opportunity you have been seeking. Can your party capture the notorious “Briny Pete”?

Hail, heroes of Tyr! Bravely you have served your adopted city since the day of King Kalak's fall. As slaves and rebels you rose from Kalak's slave pits to claim your freedom from his ancient tyranny. Now that freedom is being threatened once again by an insidious new enemy, one who controls the use of psionics throughout the dying world of Athas! The Dragon's Crown adventure is the exciting climax of the Freedom module series in one final journey of epic proportions, the player characters must defend everything they have worked so hard to build. Seven adventures connected by one great plot take the PC's from the volcanic islands of the Sea of Silt to an ancient wonder hidden in the forests of the Dragon Crown Mountains. The grandest and most ambitious adventure of the Dark Sun game world, Dragon's Crown will provide many hours of exciting play! The previous flip-book modules (Freedom, Road to Urik, Arcane Shadows and Asticlian Gambit), are helpful, but they are not necessary to enjoy Dragon's Crown Dragon's Crown, the first epic adventure for the DARK SUN™ world, takes players to the four corners of Athas, a world without...psionics? Someone, or something, in Athas has seized control of psionics. The magical powers of the sorcerer-kings, the avangion Korgunard, and the Dragon are ebbing rapidly. A tide of evil is blanketing the land and it must be stopped! But first, players must learn the secrets of the Order. This "super module" can be played as one big adventure or as separate scenarios. Contains: Out of the Valley adventure The Road of Fire adventure Dragon's Crown Mountains adventure TSR 2416 Madness in Freeport, the final part of the Freeport Trilogy, details the final confrontation between the PCs, the Brotherhood of the Yellow Sign, and Sea Lord Milton Drac. In Part One, the Drac invites the PCs to the Grand Lighthouse Ball. Careful investigation can reveal the secret purpose of the lighthouse. In Parts Two and Three, the PCs must recover a powerful artifact to thwart the Brotherhood's plans. They must pass through an infamous pirate's hidden caves, then search a sunken temple of the serpent god Yig. In Part Four, the heroes must enter the Grand Lighthouse, AKA Milton's Folly, in a race against time to stop the Brotherhood's world-shaking master plan from coming to fruition. (Bibliographic note: This adventure was originally written for v.3.0, and later updated to the v.3.5 rules. The revised versions of Death, Terror, and Madness in Freeport were reprinted in an omnibus edition, along with two shorter filler adventures, as The Freeport Edition: Five Year Anniversary Edition.) A deathpriest hierophant of Orcus has turned the lower catacombs of a cemetery into a base for the undead and demonic horde it is gathering. The deathpriest loses control, however, with the arrival of a balor, and its carefully orchestrated forays to snatch victims have turned into wholesale slaughters. The PCs arrive in a nearby town to meet with a merchant who promised to sell them a long-coveted magic item. They are not altogether pleased to arrive to find the aftermath of a brutal attack—and no sign of their item. Pgs. 150-155 You are charged with rescuing Bea’s missing sextuplets and must bring their captors to justice. A walk in the park for brave adventurers, unless the trail extends beyond the darkness.

A political wedding is threatening a major source of income for the Thieves Guild Ebonclad. Ebonclad would like to see the affair disrupted and the couple never wed. Such a job may be risky, and its outcome could very well start a war if done poorly or without subtlety. That’s why a team of promising agents has been assigned to handle it. The mission’s goal is to disrupt the upcoming wedding of Camilla Swain and Le’Nal Beshiin, to ensure Ebonclad keeps a revenue stream open that their marriage would surely close. The caveat is, neither the bride nor the groom are to be harmed. This will mean the party will have to come up with a method to disrupt the wedding as it’s happening, while avoiding suspicion. As a bonus, the party members can rob wealthy guests or steal wedding presents. The mission is open-ended, giving the players full reign to decide how they will work towards a successful outcome. It lets you work to guide player decisions based on the information presented here, or improvise results based on the players’ actions.