In the search for allies in the Underdark, you are called upon to travel through the recently opened Waydown sinkhole to find the lost myconid colony of Sporedome. It is said that they once cultivated a strain of mushrooms that could protect one from falling into madness. Can this be the cure for the rapidly spreading onslaught of insanity? The party is caught between warring goblin and kobold gangs, occupying an abandoned dwarven mine. Will the heroes ally with one of the sides in this quarrel, try to make peace between old enemies, attempt to eliminate both sides, or achieve their goal stealthily and unnoticed? The choice is completely theirs! Small Party Adventure: Though the party size of 3–5 characters is considered optimal in D&D, there are times when you can only gather one or two players at most. This adventure is designed exactly for such occasions. As whelps of the Licktoad tribe just out of their swaddling cages, the goblins Chuffy, Mogmurch, Poog, and Reta must prove themselves by undergoing a series of challenges, from tying a string to a large spider and shouting insults with hot rocks in their mouths to facing off against a goblin bully and his dimwitted minions. As a final test of their mettle, they must make a dangerous (and smelly) trek to claim a toad from the nearby swamp and present it to the terrifying presence that lurks within the Cave of Darkfear, only after which can they truly call themselves goblins! Part 4 of We be Goblins series You've enhanced your experience and with that comes training. You found a suitable teacher and have been quite studious and are ready to move on. As the instructor gives you leave, bad new strikes in the form of his sickened wife. You quickly learn that a rare herb known as Unicorn's Mane is required. As repayment, you set out to gather the item to save your friend's spouse. This adventure setting was designed for 5th Edition AD&D for the Filbar Campaign, but is easily adaptable to most any game and system. This scenario is a true solo meaning you don’t need a DM to officiate. It is suggested that a 4th level be used for “meatier” characters or 5th for those of less daunting stats. Don’t forget to follow us on Twitter @FilbarRPG for notices and updates as well. You have been sent to be an envoy for your country to a desert nation recently created. The area is known as a bandit haven and the new ruler ascended due to his overthrow of the others. As you open dialogue, Frito, the new leader, is willing to accept a trade agreement if the party resolves a few renegade issues for him. Designed for four, fourth level PCs! Baron Ketterall’s lands are beset by a plague of marauding goblins! Goblins you say? Pah! Who's afraid of few poxy goblins? But two experienced parties have already gone looking for the goblin lair – never to be heard of again. Poxy goblins you say? Be afraid, be very afraid… The scenario is designed to be an extremely challenging adventure that might undermine a player’s bravado in dealing with low-level monsters such as goblins. Unusual traps, tricks and special weapons are used by the inhabitants of the dungeon to cause the party as much trouble as possible. Bandits have kidnapped the eldest child of one of Timbertown’s prominent citizens, who is secretly being manipulated by shadowy forces. You are tasked to get her back. But there are questions. Is she his real daughter? Does she want to be found? Who is behind the kidnapping in the first place? If you bring Evi home alive, your rewards will be great, and your standing in the town will increase. But if you fail, or if the demon worshippers of the Fraternity of Tharos gain a further foothold for their secret society, Timbertown's future may be in jeopardy. An 4-6 hour adventure for 4-6 characters of level 3-5 Includes maps, handouts, stat blocks, and NPC character cards! This adventure can be played in any frontier campaign area, but is set in the author's home campaign setting of Timbertown, a barony in Impiltur, a kingdom on the Sea of Fallen Stars in the Forgotten Realms, also available from the Guild. A peaceful isolated village has hosted its share of superstitions, but something real is poised to plague the citizens of the community. Can heroes rise to prevent the destruction of the village? 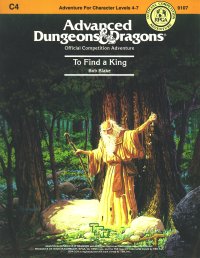 Two centuries ago, the last king of the celtic kingdom of Pellham was deposed in favor of a High Council. Now, however, things are going badly, and a restless populace longs for the days of the ancient kingship. The High Council is floundering - and the political situation is turning ugly. It was then that the Brothers of Brie, and obscure monastic order, discovered a long-forgotten prophecy. In Pellham's time of greatest need, a long-dead king will rise to restore order. You have been chosen to prove that this is the time of the prophecy. You will take the first steps toward returning the lost king to the throne. This adventure contains the first four rounds of the AD&D OPEN Tournament that was originally run at GEN CON XVI Convention. It includes a tournament scoring system and a team of 10 characters of levels 4-7. This adventure can be played alone or as the first part of the two-part PROPHECY OF BRIE series. TSR 9107