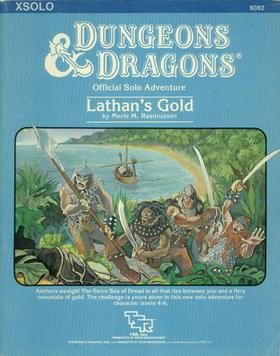 Kidnapped! The cursed Baron von Hendriks has kidnapped your betrothed. Now the madman wants as a ransom your Alandah's weight in unrefined gold! How are you going to pay? The baron himself has been kind enough to provide you with that answer: streams of raw gold gush from a burning mountain somewhere in the Sea of Dread. All you have to do is find this mysterious mountain. Unfurl the sails! The open sea awaits you and your crew as you sail from the city harbor. But beware! The Sea of Dread has more than earned its title over the centuries. Can you survive the perils of the sea? Will your crew mutiny before you reach the Burning Mountain? Or will you have to throw crew-members overboard just to make room for the gold? Solo adventure. "Lathan's Gold" is a real innovation in solo adventure design, considerably more complex than any of the gamebooks then being produced. Though the adventures uses the typical trope of numbered paragraphs, its paragraphs are divided into six types: "S"pecularum, "U"rban", Island "E"xploration", "C"oastal", "T"rade Routes, and "V"oyages. Players can jump between the sections, then return, in slightly freeform ways. Players are also required to keep track of hit points, money, and treasure (which were typical for the more advanced gamebooks), and rations, days remaining, and hull points (which were not). Another freeform element, quite unusual for gamebooks, is the "wandering monsters" table, which introduces semi-random encounters. TSR 9082 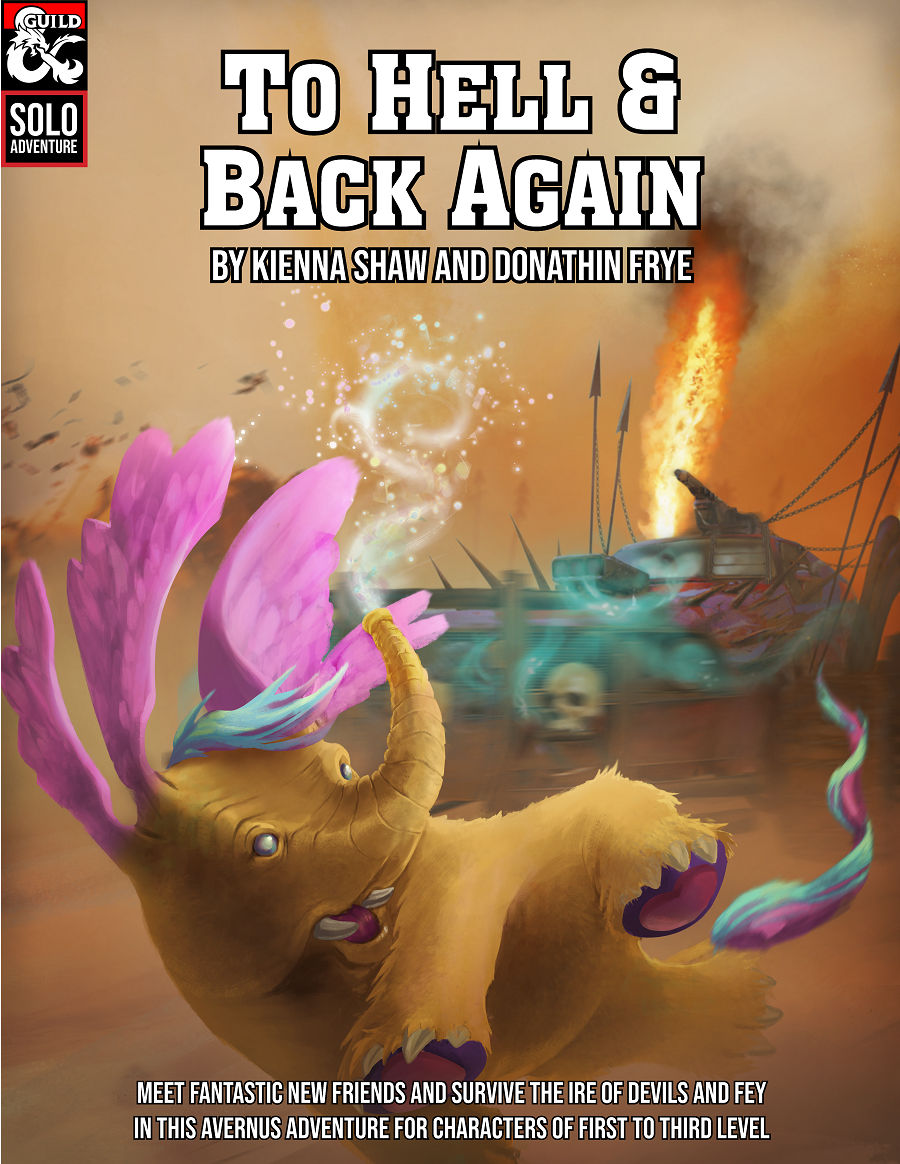 To Hell and Back Again is the perfect adventure for new players and veterans looking to experience Dungeons & Dragons in a new way! It's written as a solo adventure, where choices have gigantic consequences, but it also provides balanced rules to play with a group or a Dungeon Master as well! This 80 page adventure features: - A heart-pounding origins story that fits perfectly as either a prequel to Descent Into Avernus, a stand-alone adventure, or into your ongoing fantasy campaign. - Beloved characters like Lulu the hollyphant, Mad Maggie and her redcap gang, the archdevil Zariel, and many others brand new to this adventure. - Infernal War Machines, and exciting encounters with unique stat blocks. - Innovative Destiny and Traits mechanics that make your choices really matter. - A ton of possible outcomes that will fuel your character's many adventures to come! - Four gorgeous sample characters, with interactive character sheets designed to be new-player friendly so that you can jump right into the story if you'd like. - A community survey when you finish so that you can see how your outcomes and choices compared to other players!

Tucked away in the Springwood Forest is the Elven settlement of Silvantri. The town is filled with those Elves who left their ancestral home in the Treetop Forest. The community is elevated and suspension bridges link the buildings together. This setting will allow those enjoy Elven backgrounds to further their joy.

North Sordack Valley is set northeast of Commerstance and was originally slated for the Filbar Dual series but the players didn’t go in that direction. This area is filled with individual challenges synonymous with the Filbar Area series. This ‘sandbox’ style adventure has multiple different encounters can be used in a variety of ways. The general setting allows you to customize it for your own campaign! This adventure setting was designed for 1st/2nd Edition AD&D for the Filbar Dual Campaign for various level groups of adventurers. This adventure is easily adaptable to most any game and system. Save yourself some time and utilize it for several one shot adventures or a continuing campaign setting! Don’t forget to follow us on Twitter @FilbarRPG for extra information. Nanfield is an island village of over 50 NPCs with mysteries plaguing both its present and its past. It contains a unique ecosystem and economy and a ship full of friendly pirates that will invite you by for dinner after accidentally attacking your party. It can be inserted into any campaign as an interlude during a travel montage, as a one-shot encounter, or as the base of future adventures. It best suits a party of level 4 to 8 characters, but can be easily modified or run for lower or higher level groups. Advice on fitting the encounter into your campaign is provided throughout. Nanfield contains over 50 NPCs you can use, several very unique and compelling characters, a Druid stat-bloc, a ship-to-ship fight, an investigation, and a fight with a Harpy (or more, depending on the outcome of the investigation).

A wedding and a jealous lover what could go wrong. A small and light hearted adventure perfect for kicking off a campaign in a city.

Even close knit adventure parties could use a break from each other once in a while. Hiatus from the Party is a set of several different adventures for solo PCs and a DM. The adventures have been divided up into selections depending on classes and are meant for lower level adventurers. This scenario can also be used to introduce players to a game!

The wizard Sehvain Malual has been going strangely distant of late. It is up to the PC to discover what is going on with him. The adventure offers several potential hooks for drawing the PC into the plot. The adventure is designed specifically for a wizard character of level 8-10. As such, the encounters encourage the use of a wizard’s skills and abilities. Characters with ranks in Linguistics, Knowledge (any), and Spellcraft will have many opportunities to utilize their skills. Sorcerers could also participate in this adventure but would probably need to purchase scrolls and potions to make up for their reduced spellcasting options.

The river has mysteriously run dry and the farmers' crops are in peril. Locals are convinced a nearby tribe of goblins are responsible, and have offered a reward to anyone brave enough to sort it out. While they were correct about the goblins causing the drought, they were wrong about the reason. The chief of the goblin tribe is an enthusiastic fisher and a particular fish, Salvel the Talking Trout has continually eluded him. This adventure has a humourous tone and emphasises role-playing and negotiating. A solo gamebook quest for 1 Level 2 PC, this adventure sees the brave adventurer enter Weathercote Wood in search of a noble's son. The local legends around this wood are full of terror... Dare you enter? This is written like the classic 80s gamebooks Lone Wolf and Fighting Fantasy... no DM required! Part of a series, the PC can then continue to Tyrant of Zhentil Keep, and Citadel of the Raven beyond that.

Sometimes when wandering in the wilderness you just need to find a refuge. Welcome to Lord Morningstar’s Keep, a place of safety and security while in between adventures. The newly promoted Marquis Morningstar is a personable man who spent years on the trail fighting evil. His wilderness outpost suits his personality and his men love him for it. While not officially a “town”, this outpost can be utilized as a safe haven and a location where level training can be achieved.

A SOLO adventure for thieves level 1-3 or Group play level 1-3 The storm sweeps off the mountaintops without warning, as if conjured by some supernatural power. Within minutes, huge drifts of snow have halted the caravan, and the snow falls so hard it is impossible to see more than five feet. You huddle next to the sledge, trying to shelter for you numb face from the icy winds. A dozen half-human forms march into view out of the raging blizzard. The little man-things carry wooden spears or long, unsheathed swords in bony, gnarled hands. Their blood-red eyes quickly fall upon your sledge and the ugly creatures turn toward your hiding place. Will you survive to uncover the secret of Blizzard Pass? This module contains all you need to solve the riddle of Blizzard Pass, including 14 maps, an invisible ink marking pen, a complete solo adventure, a pre-rolled character, and an outline for group play! TSR 9067, from 1986