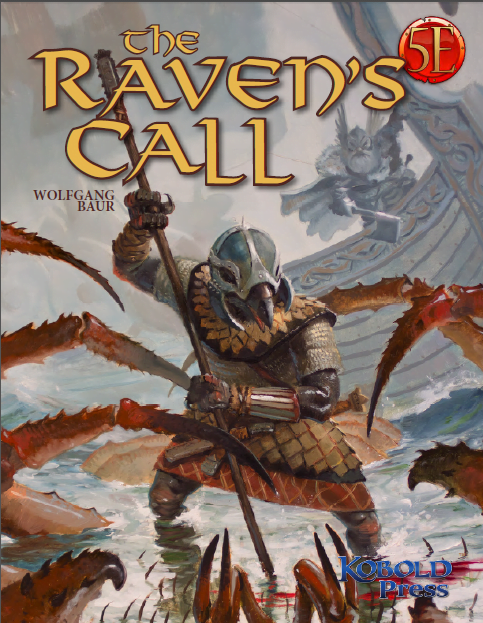 Meet the Trollkin… And Drive Them Into the Sea! The trollkin and their shaman have come to a village by the sea, stormed its walls, and taken all the villagers as slaves and property. They have eaten their way through the saltfish, devoured the herd of sheep, and might be planning to eat the PCs next. Then, one escaped villager begs strangers on the road for help… And gives them the chance to shine as true heroes striking down raiders of pure evil. The Raven’s Call is an adventure for 3rd level characters that brings mythic power and a true rescue story for 5th Edition, and introduces locales and NPCs that players will never forget. It offers new monsters and new magic in the unique style of Wolfgang Baur, one of the leading RPG adventure designers. A truly heroic 5h Edition adventure for 3rd level PCs near any wooded shore. Includes 6 pregenerated characters for immediate play or for use as NPCs. 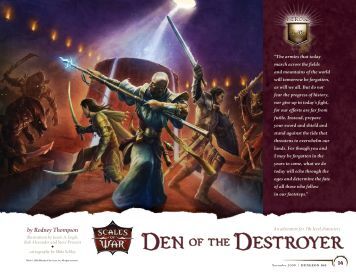 “Den of the Destroyer” is the sequel to “The Lost Mines of Karak,” continuing the unfolding story of the Scales of War adventure path. In this adventure, the PCs are called back to Brindol by a surprising summons. There they learn that a platinum sword they had collected back in "Rescue at Rivenroar" is no mundane item - the blade is sentient! The blade charges the PCs to undertake a dangerous mission to an abandoned githzerai fortress in order to perform a ritual to awaken the blade's true form. Along the way, they must deal with bounty hunters hired by an old enemy (from "Shadow Rifts of Umbraforge"), and confront a vile gang of gnolls terrorizing Elsir Vale.

A Four to Six Hour Adventure for 11th-16th Level Characters in Dungeons and Dragons 5E The Adult Green Dragon Valturnax has attacked the nearby village of Hartsvale, threatening to destroy them completely if they do not submit to his rule by nightfall. To save the town, adventurers must ascend the mountain by climbing through the caves housing the dragon’s minions and face him in his lair – and they need to do so before the sun sets. This adventure is meant to be quite challenging. Enemies know the adventurers are coming and have had time to prepare, and they do so intelligently. This adventure draws some inspiration from Tucker's kobolds. As an added bonus, this adventure is available completely for free. A year ago, a white dragon came out of the mountains north of Polarton, attacking trappers, driving off game, and marauding as it pleased. The dragon is seriously affecting the financial stability of the town. Therefore, the town council has placed a bounty on the dragon. This is a short arctic adventure.

The PCs are called on to assist in retrieving the legendary Scrolls of Thoth on behalf of Khemet III, the Ruby Prince of Osirion. Along the way, they discover the ultimate fate of the ancient Song Pharoah -- and potentially assist her in her journey through the Duat, the final series of tests that a Pharaoh must face in the afterlife. It was designed as a one-shot lasting approximately 5-6 hours, but could be run as a side-quest in the Mummy's Mask adventure path. See the site for notes on adjustments to make if you are using it in that way. It includes maps, handouts, stat blocks for all of the NPCs, and Hero Lab files for Hero Lab users. Because the adventure is born digital, the page count is a rough estimate based on print previewing the pages in the site. There is no source of a printed copy other than printing one yourself (which you are welcome to do). This adventure has not been published, and is made available under the terms of the Paizo Community Use License.

Just off the northern coast of Chult churns the waters of the Cauldron, a single volcano with a terrible history. Legends from the jungle lands say that it vomits forth lava, stone, and monsters if the peninsula is threatened - and yet the recent events did not set if off. So why is it threatening to explode now? Part Three of the Broken Chains Series. In order to rescue a friend, the PCs must sail into the Abyss and infiltrate a prison built by the Prince of Demons. A Savage Tide Adventure Path scenario. The granddaddy of all dungeons originally released for Dungeons and Dragons version 3.0. This version was revised for the Pathfinder rules system. It includes 19 levels and numerous wilderness areas never seen in prior versions of the adventure. This was published by Frog God Games and Necromancer Games 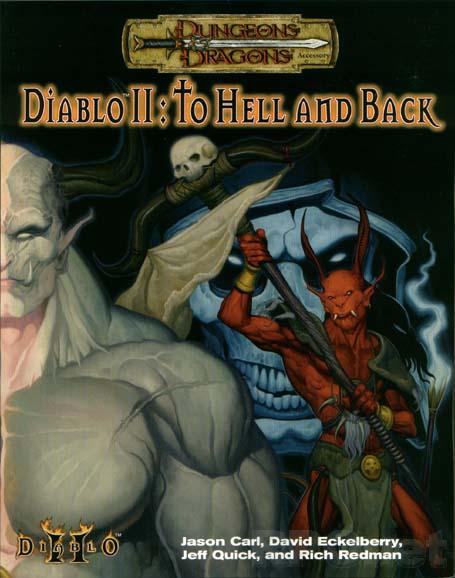 The heroes arrive at the eponymous Keep on the Borderlands, a fortress on the edge of civilization built to stave off the chaos and evil of the wilderness. Using it as a home base, a party can make forays into the surrounding wilderness, encountering monster and marauder alike. The centerpiece of the adventure is certainly the CAVES OF CHAOS, a network of tunnels and caverns found in the walls of a nearby but isolated ravine. It is here that hordes of evil humanoids have made their home. Through combat and negotiation, the players can try to explore and map out these caves, perhaps with the aim of accumulating valuable treasure or even cleansing the land of evil creatures. However, even the Caves are not all they seem. Beyond the goblins and kobolds lurk dark horrors: cults dedicated to fiendish chaos and a Minotaur's enchanted labyrinth await the unprepared adventurer. But for the hero who is brave, clever, and fortunate in equal and sufficient measure, great treasures and glory await in the Caves of Chaos that lie beyond the Keep on the Borderlands! TSR 9034 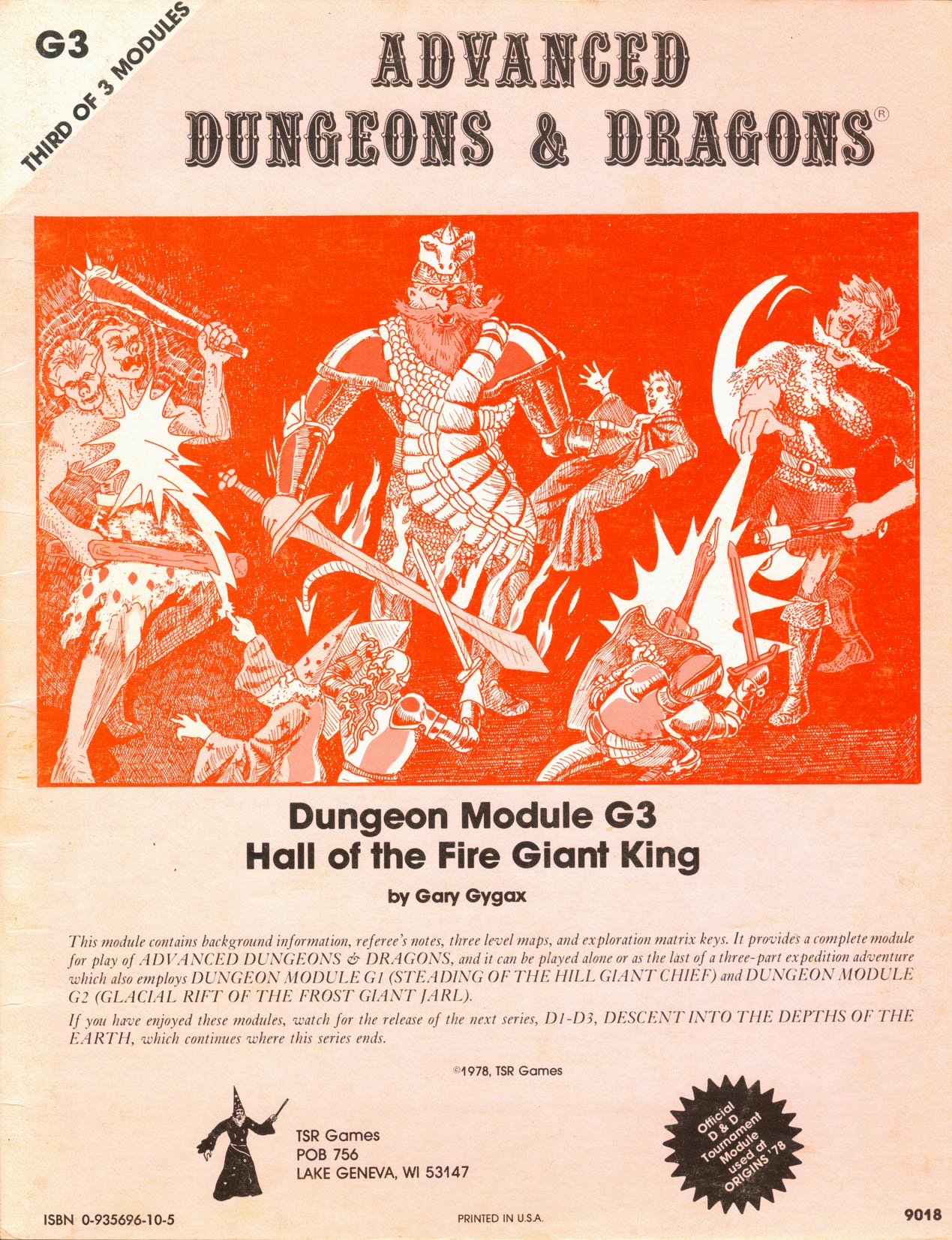 Just as the trail led from the STEADING OF THE HILL GIANT CHIEF to the frozen wastes where was found the GLACIAL RIFT OF THE FROST GIANT JARL, so the adventure in the latter place has let (or transported) the intrepid party to what they hope will be their last challenge. They are about to venture into the hot and smoking barrens which are in effect Muspelheim, the home of fire giants. This module contains background information, referee's notes, three level maps, and exploration matrix keys. It provides a complete module for play of ADVANCED DUNGEONS & DRAGONS, and it can be used alone or as the last of a three-part expedition adventure which also employs DUNGEON MODULE G1 (STEADING OF THE HILL GIANT CHIEF and DUNGEON MODULE G2 (GLACIAL RIFT OF THE FROST GIANT JARL). TSR 9018, From 1978